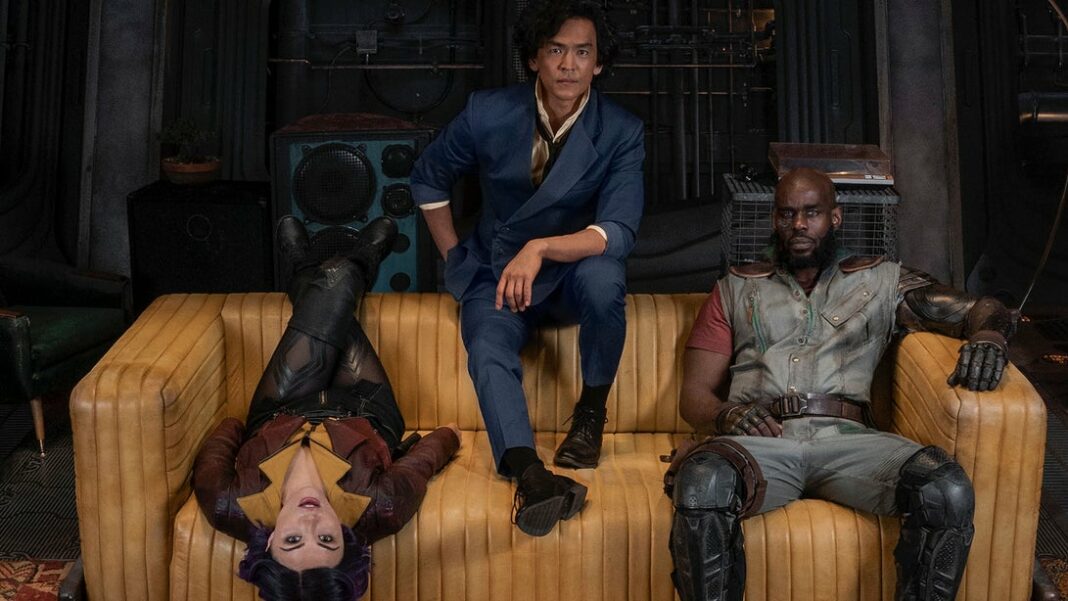 “Cowboy Bebop”, a Netflix original series from Tomorrow Studios and Sunrise Inc., has been in development for almost five years. But it wasn’t until recently that fans got a decent look at the program, thanks to first-look photographs of the major characters, advertising posters, and an anime-friendly opening sequence revealed during Netflix’s TUDUM worldwide fan event. Despite the fact that narrative specifics for the live-action series are still few, the majority of the cast has been disclosed. Mustafa Shakir, Daniella Pineda, Alex Hassell, and Elena Satine have been cast as Jet Black, Faye Valentine, Vicious, and Julia, respectively, in the lead role of former hitman Spike Spiegel. All of the players are enthralled by their roles in the production, while Cho is particularly enthralled by a character other than his own.

John Cho recently reacted to a question from co-star Pineda about his favorite character in “Cowboy Bebop” during a collaborative interview as part of Netflix’s TUDUM event. Cho chose Pineda’s character Faye Valentine as his favorite, much to Pineda’s delight. He went on to say that Faye is his favorite due of her unique and engrossing past. Faye also has lethal survival instincts, which makes her even more lovable. Cho later joked that Faye was still irritating in the sequences, to which Pineda responded that it wasn’t any different in real life. Take a look at what Cho had to say in the following paragraphs.

“Faye Valentine. Her story is so interesting and compelling, and her survival instincts just make for a really likable character. I mean in scenes, she’s annoying.”

“Cool, Lost, Hungry” are all pretty accurate when it comes to describing Spike. we asked the cast of Cowboy Bebop to interview each other about the upcoming series. #Tudum pic.twitter.com/fexhRajt01

Faye is a bounty hunter and con artist in “Cowboy Bebop”, and her gambling problem has put her in a lot of debt. She spent 54 years in suspended animation after being put into a cryogenic freeze for her role in a space shuttle disaster. Despite the fact that Pineda has done an excellent job portraying Faye, she has been chastised for not fitting the character’s initial busty, sexualized, revealing appearance. The actress, on the other hand, had the ideal retort to the criticism: she rushed to Instagram to sarcastically apologize on behalf of the producers for not being able to locate a lady who was “six foot, double-D sized breasts, two-inch waist” to play Faye.

Following the sexist comments to Pineda’s casting, John Cho’s support for her role confirms that all of “Cowboy Bebop’s” modifications to Faye are for the better. Faye is a character with many colors and levels, and if people look past her inhumanly shaped bodily parts, they can see a lot more of her personality. Her storyline in the anime was well-written, with a compelling history and significant character development. Nonetheless, her portrayal in the popular press was chauvinistically reduced to that of supporting eye candy. However, as seen by Cho’s assurance, the “Cowboy Bebop” live-action series appears to have corrected the anime’s flaws, allowing fans to experience Faye in her full glory.

Previous articleHow “House of the Dragon” Is Making Direwolf Mistake From Game of Thrones Even Worse?
Next articleWhy Jared Harris Can’t Have Good Time On TV?