A new character poster for Netflix’s “Cowboy Bebop” has been released, featuring John Cho as Spike Spiegel in a close-up shot. The series is a reworking of the iconic anime that is widely recognized for introducing Western audiences to the art form of Japanese animation. The first season, which aired in 1997, lasted only 26 episodes. Its influence on anime and cyberpunk culture, on the other hand, cannot be emphasized.

In the year 2071, the sci-fi western chronicles the narrative of a group of spacefaring bounty hunters. Spike Spiegel, the captain of the ship Bebop, is played by John Cho. The rogue faked his death to get away from the Red Dragon Crime Syndicate, and now he and his companion Jet Black are on the lookout for criminals (Mustafa Shakir). Vicious (Alex Hassell), a former Red Dragon compatriot, tries to track him down and murder him throughout the series. Daniella Pineda will play Faye Valentine in the series, which also stars Rachel House, Geoff Stults, Mason Alexander Park, Tamara Tunie, Elena Satine, and Ann Truong. On November 17, Netflix will release “Cowboy Bebop“.

Netflix Geeked published a brand new character poster with a closer look at John Cho in character as Spike Spiegel on their Twitter account. The graphic shows Spike creating a finger gun next to the slogan “bang,” but it also displays a glimpse of his hair as near to the original character design as it has ever gotten. The caption accompanying the photo said, “Whatever happens, happens.” This is a memorable line from the character, which he said in the 19th episode of the original anime, “Wild Horses.” Here’s a link to the full-size poster: 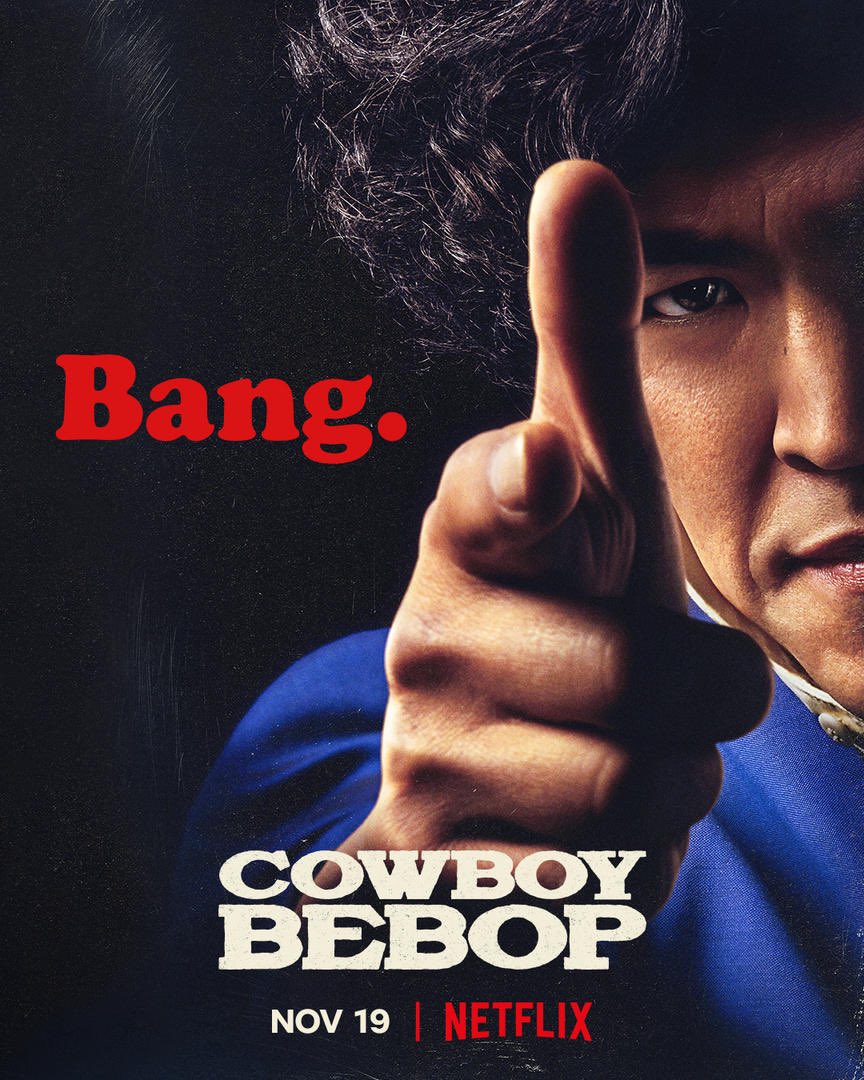 In addition to bringing Spike and his crew’s story to life in three dimensions, the series has hinted that they would delve into Spike’s background. This week, the first official trailer for “Cowboy Bebop” debuted, hinting that Spike Spiegel isn’t even his real name. This is an area that the first series hinted at but never fully explored.

Fans of the anime should proceed with caution when viewing “Cowboy Bebop”. However, the more footage of the live-action adaptation that Netflix releases, the more it appears that the program has managed to capture at least a bit of Spike Spiegel’s easy calm, and unforgettable journey. Even if the program isn’t exactly up to par, it will almost certainly prompt new fans to seek out the original anime, which isn’t a bad thing.