André Nemec, the showrunner for Netflix’s live-action adaptation of the legendary anime series “Cowboy Bebop”, sat down with Polygon recently to discuss his vision for the program, which includes his goal to “not fuck it up.” In the piece, he notes that he didn’t want to “remake” Shinichir Watanabe’s series, but rather reassemble the pieces that made the original anime work so well, and see if they could do it again “in the spirit of the anime.”

The teaser photographs of John Cho, Daniella Pineda, and Mustafa Shakir in costume as the show’s primary trio of sci-fi bounty hunters posted by Netflix support this theory. They’re clothed similarly to their animated counterparts (within reason), but things have been changed where necessary to keep the anime vibe invoked by Nemec.

That attitude or approach is what puts Netflix’s “Cowboy Bebop“ in a shockingly strong position to handle the main villain of the original anime, a ruthless criminal known simply as Vicious. Vicious, like the Major from Ghost In The Shell (who definitely shouldn’t have been made into a live-action film), is a character who belongs in anime, where aesthetics and emotion are more important than in live-action or Western animation.

With the Major’s form and Vicious’ stiff, pointed angles, they’re both built in a way that doesn’t necessarily translate to live-action, and they move in ways that a human couldn’t. Even if only in the context of anime, it all adds up to them being amazingly cool characters.

The issue about Vicious is that, at least on the surface, he isn’t much of a character. You’d be hard-pressed to find a “Cowboy Bebop” fan who doesn’t agree with him, yet his personality can be summed up in one phrase: “He’s a guy with a sword.” There’s certainly more going on beneath the surface, but his heart has hardened to the point that he’s buried everything else he’s ever thought or felt in favor of intentionally embracing the fact that he’s a swordsman. Maybe it’s more accurate to call him a sword, because he’s all intimidation, sharp edges, and cold steel.

Vicious’ past is primarily seen rather than discussed, and he is barely mentioned throughout. We know he fought in a future space war and worked for the Red Dragon Crime Syndicate with “Cowboy Bebop” protagonist Spike Spiegel (Cho’s role in the live-action version). He may have been in a relationship with Julia, a mysterious woman who was also in a relationship with Spike.

Vicious’ existence appears to be obsessed with a desire to murder Spike—to the point where he’s repeatedly shown sitting calmly in darkened areas with his eyes closed, waiting patiently for an opportunity to kill his foe—whether it’s due of that ancient hatred or general bloodlust. 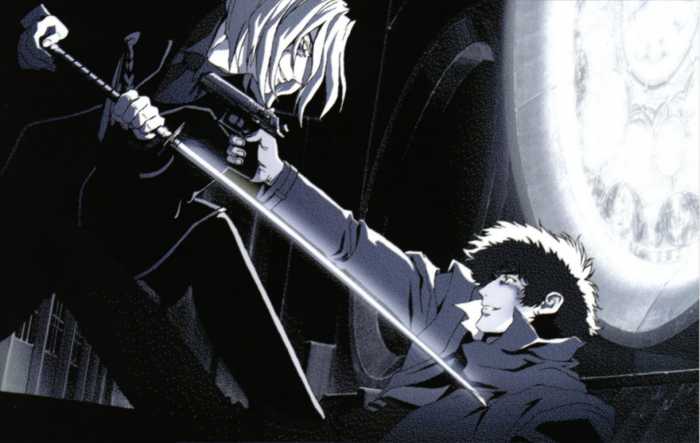 Vicious was able to get away with being a captivating villain merely because he appeared to be one in the original anime: Because aesthetics are so crucial, Vicious being drawn a specific way takes care of a lot of the legwork, whereas another medium might struggle to do it. With his lanky limbs, long white hair, and constant frown, he appears frightening.

His actions are equally frightening, and his voice sounds like an icicle impaling another icicle, especially in the highly renowned English dub, when he’s voiced by Skip Stellrecht. Vicious’ vocabulary is also particularly flowery and melodramatic for a “Cowboy Bebop” tv show, with lines like “you will drop scarlet tears” and “he was a beast who lost his fangs, which is why he had to die.” Vicious is the type of character who can make such things seem cool.

So, how and why might this work in a live-action setting? Why might Vicious succeed where the Major failed? As Nemec said to Polygon, he wants to convey the anime’s “spirit” rather than faithfully duplicate it, and Vicious is nothing if not “spirit.” John Cho has to worry (and has worried) about appearing like Spike and recreating the vibe of a guy who masks a lot of deep suffering by acting incredibly relaxed and unconcerned about anything.

Most of the work will be done if Nemec can make Alex Hassell, who is playing live-action Vicious, look sufficiently like Vicious from the anime. There are parts of the character that the series should stay true to, but not so many that Nemec and Hassell won’t be able to come up with their own stories to tell.

Vicious, a character who has no right to be seen in live-action, really gives a fantastic opportunity for Netflix’s “Cowboy Bebop” to either lean into the anime’s aesthetics or build on the character in a way that the anime avoided. Vicious, on the other hand, will be a crucial test for the adaption. If Nemec and Netflix can’t make Vicious work in live-action, it’ll be difficult to see any of “Cowboy Bebop” doing the same.