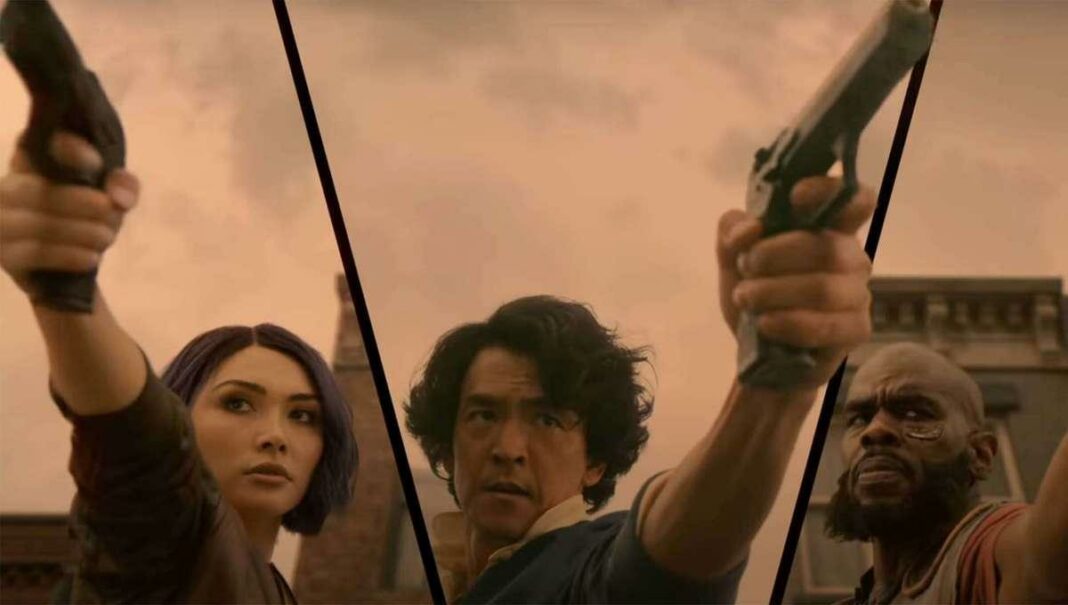 The new teaser video for Netflix’s live-action adaptation of the popular ’90s anime series gets a grindhouse makeover thanks to a new “Cowboy Bebop” fan poster. The Sunrise anime, which first aired in 1998, followed bounty hunters Spike Spiegel, Faye Valentine, and Jet Black as they traveled the galaxy in quest of the next paid assignment to put food on the table while simultaneously avoiding the demons from their pasts. Since its introduction, the series has been acclaimed as one of the greatest animated and anime shows of all time, as well as credited with introducing Western audiences to the latter genre.

John Cho will play Spike, Daniella Pineda will play Faye, Mustafa Shakir will play Jet, Elena Satine will play Julia, and Alex Hassell will play Vicious in the live-action “Cowboy Bebop“. Mason Alexander Park’s Gren, Adrienne Barbeau’s Maria Murdock, and the still-unknown face of fan-favorite Radical Ed will all appear in the series as supporting and recurring characters from the anime. With barely a month till the release of “Cowboy Bebop”, Netflix is hoping to keep the hype going for the series.

Following the release of the first teaser trailer, Netflix Geeked shared a “Cowboy Bebop” fan poster created by artist Sean Longmore on Twitter. The image is based on the teaser “The Lost Session,” and it gives the video and live-action anime adaptation a grindhouse feel.

From the numerous Easter eggs to the creative camerawork and editing, the recently released “Cowboy Bebop” teaser trailer was a delightful surprise for fans of the anime, and the fan poster is sure to be another pleasure for those eager for the series’ arrival. The fact that Netflix’s Geeked Twitter account published the art suggests that the streamer collaborated with Longmore, and the result is certainly intriguing for the two, with plenty of the video’s more exciting moments on display in the art, including Spike wielding the pipe as a weapon and the wide shot of the titular starship. Spike’s occasionally trustworthy pals Faye and Jet, as well as their chosen weapons and unusual costumes, are also included on the poster.

While some may be on the fence about the live-action version, Netflix’s “Cowboy Bebop” series has a lot going for it in terms of breaking the genre’s curse. Not only did the series’ original creators and composer join as creative consultants, but it was also recently announced that the original Japanese “Cowboy Bebop” actors would reprise their roles for the Netflix version. When the series premieres on Netflix on November 19, only time will tell if it can live up to the high expectations set by fans.

Knees Out in Revealing New Me & Roboco TV Anime Visual