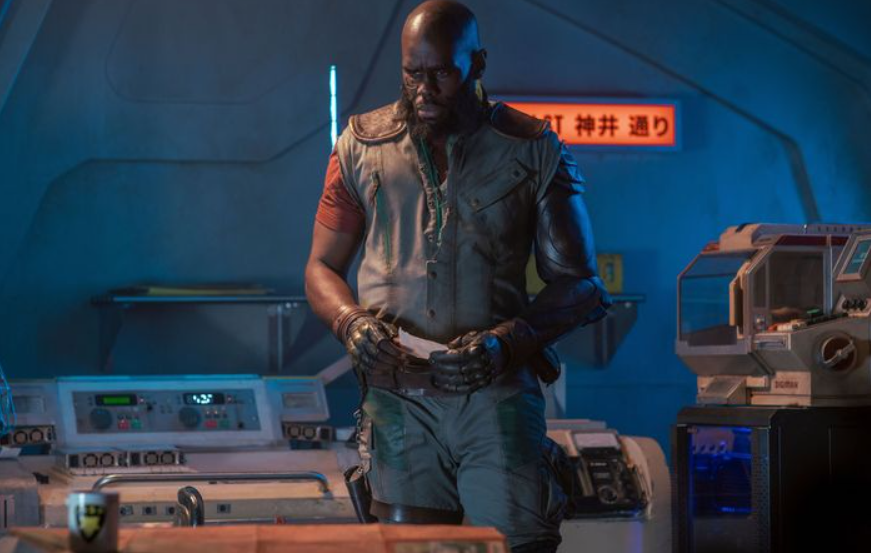 One advantage of Cowboy Bebop’s particular blend of sci-fi, Western, and noir is that the series can lean entirely into any of those genres at any time. “Darkside Tango” identifies itself as a noir in the most classic sense from the start: if the whodunit plot, somber jazz, and fedoras weren’t enough of a giveaway, the episode’s shadowy cinematography and camerawork, which is heavy on Dutch angles, places it solidly in a very rich lineage.

But there’s a drawback to being in the company of films like The Third Man and The Maltese Falcon: if you’re going to base your plot around a mystery, it better be a good one. Is there anything more aggravating than waiting for a TV character to find out a plot twist that every other viewer has figured out a full 40 minutes earlier? Because I can’t image anyone viewing this episode and not immediately recognizing the sleazy cop who resulted in Jet’s discharge from the force.

Let’s take a step back. “Darkside Tango” begins with a flashback of Jet and his ISSP colleague, a scumbag named Fad, on the trail of a crook named Udai Taxim. Jet’s mission is to apprehend Udai and force him to divulge which cop has been working with the Syndicate in secret. Jet believes someone in the ISSP is corrupt, and he suspects Chalmers, but he lacks the evidence to bring him in.

Jet tracks down Udai and pursues him — strangely, Fad does not join him — and just as Jet has Udai cornered, he is blinded by a pair of headlights. Udai takes advantage of the opportunity to fire a full clip of bullets at Jet. Jet is soon erroneously labeled as the filthy cop, culminating in his expulsion from the ISSP, which coincides perfectly with the dark period in which Jet (1) lost his arm, (2) lost his family, and (3) received a five-year jail sentence. If that isn’t the stuff of a country and western hit, I don’t know what is.

Back in the present, a prison ship has crashed on Europa, resulting in a gold rush of criminals for any bounty hunters in the region to scavenge. Jet, on the other hand, swiftly zeroes in on one prominent name on the list: Udai Taxim, his former rival, who also comes with a 45,000,000 bounty.

For Jet, this is a personal matter, so he abandons Spike and Faye to join forces with Fad, who would never have sold him out for money or power. They’re pals! They discuss jazz, children, and Fad’s wife’s lasagna! Their rekindled alliance, however fleeting, provides a bleak glimpse into how the ISSP operates: by rushing into an opium den and tormenting a low-level criminal until he agrees to assist them in finding Udai. (Given everything else we’ve seen, it’s no surprise that the ISSP is as terrible as the Syndicate — but I can’t say I’m thrilled to see Jet using his false badge to bust up some guy’s teeth.)

Jet and Fad ultimately track Udai down to a freight yard, assuming he’ll hide in a shipping crate in a desperate attempt to escape the world. When Jet follows Udai and demands for the identification of the corrupt cop, Fad shoots Udai before he can say anything.

Yes, it was Fad all along — drumroll, please. Lift your mouth off the floor as much as you can. Fad attempts to shoot Jet, but in a beautiful touch of theatrical irony, Jet blocks the bullet and shoots Fad instead. Chalmers appears and giggles at the cosmic unfairness of it all: Jet has now slain the sole person who could clear Jet’s name. To Cowboy Bebop’s credit, it’s a feel-bad finale that fits the episode’s noir roots perfectly.

However, while Cowboy Bebop’s noir imitation is a pleasant exercise in style, it’s not the episode’s greatest material — because running parallel to the Jet Black tale is a Spike/Faye romance that’s a lot more fun.

It’s taken me this long into the recap to bring it up because, honestly, very little happens. When Jet departs to find Udai, Spike and Faye remain to determine which of the other bounties they should pursue and then… don’t. Instead, they hang out on the Bebop, drinking beer and debating over the best bounty they’ve ever hauled in. Faye tangos with a dog at one point. It’s a refreshing reminder that, whatever other genres Cowboy Bebop dabbles in, it can and should be a first-rate hangout comedy.

• In our Syndicate subplot, Vicious meets with Mao Yenrai to sell his Elders coup. It doesn’t go well, but Julia manages to keep things from going completely off the rails by agreeing to Mao’s sarcastic demand that Julia sing for her. Next time, we’ll see if Vicious can persuade Santiago, a.k.a. the Eunuch, to join their rebellion — and given that the episode’s brief clip of Santiago includes him saying, “You’ll never know true power until you’ve tasted the testicles of a man who’s wronged you,” I expect Vicious to be a little more cautious about what he says.

• Are opium dens making a comeback as well? Time is a flat circle, and so on.

• “Cosmos” is playing as Jet walks away from Fad’s body.

• I couldn’t find the song Julia sings to Mao Yenrai, but if you recognize it, please leave a comment below.

• I’m not sold on Hunter Bear Ninja yet, but Foot Cockroach Atomic Bomb appears to be a decent Rock Paper Scissors equivalent.

• I am completely sold on the benefits of a shower-bath-shower combination.

• The Sutherland Twins, Fat Elvis, Tony the Chop, Ponzi Pete, T-Bone Wilson, Jimmy Two-Shits, the School Girl 5, the Kangaroo Kid, Eddie Bazooka, and Pastor Pete were among the criminals that escaped from the prison transport on Europa.