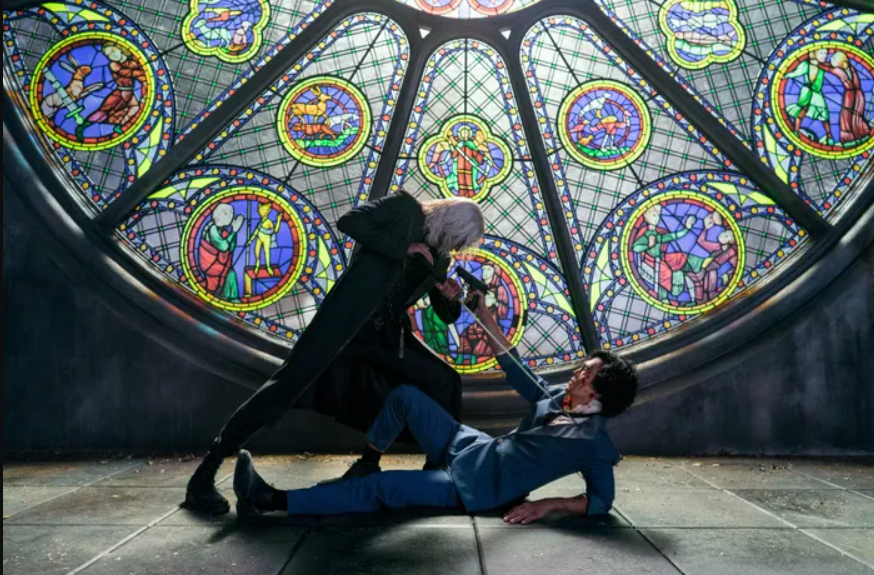 Spike’s past and present have finally clashed. Jet and Faye rush in with their weapons drawn, preparing to rescue their friend from Ana and Gren as he recovers at Ana’s bar following his struggle with Mad Pierrot. Given what those two know about “Fearless” and what Spike knows he must do next, the situation drives Spike to make a long-awaited confession regarding his prior existence as a Syndicate hitman.

I’m not sure why this would enrage Jet — a character we’ve seen kill people for money! — so much. But in this case, he had a valid beef: The Syndicate kidnapped Kimmie, and because Spike didn’t tell him the truth, he had no idea what was about to happen. Jet is so dissatisfied that the two partners have no choice but to go on one last task together. And the road quickly brings them to a location that Cowboy Bebop has been hinting at in the opening credits since the first episode.

Vicious leads Spike and Jet to an old church for a very specific reason: it’s the location of their family plot, where he originally meant to bury Spike, in honor to his conviction that Spike was a loyal brother. He still intends to bury him there, but this time he wants to bury him alive. That’s not as nice in terms of gestures.

“I thought you were supposed to be my brother.” Vicious shouts, “You were supposed to love me!” before informing Jet and Kimmie that he’ll kill them just to make Spike’s suffering worse. But it would be a very depressing way to finish a TV season, so it’s no surprise that Faye rescues the day by arriving aboard a ship and spraying the Syndicate minions with machine-gun spray.

Jet seizes the opportunity for a clean break with no further violence. But, just as he’s about to make another lucky escape, Spike declares that he’s not done yet and returns to the church, determined to either kill Vicious or die trying.

All of this is a play on a very memorable sequence from the anime, and Cowboy Bebop is determined to nail this moment. Almost every aspect is taken verbatim from the original series, including the song “Rain,” much of the dialogue, certain camera angles, and the extremely iconic shot in which Spike and Vicious freeze in front of a massive stained-glass window.

But, after paying such meticulous homage to the original, Cowboy Bebop follows up the long-awaited Spike-Vicious confrontation — which ends in a stalemate — with the intriguing decision to turn its plot in its own direction. It’s not surprising that Julia turns up and shoots Vicious. It’s hardly surprising that Julia has a strategy that differs from what Spike desires.

What is surprising — though entirely justified — is just how far Julia is willing to go. Spike says no when she proposes putting Vicious’ head on a pike and taking over the Syndicate herself. This compels Julia to raise the question that both of these men should have asked her all along: “What about what I want?”

Vicious clearly regarded Julia as a trophy rather than a person. But Spike’s excessively romantic image of fleeing the Syndicate with Julia — after meeting her under a bridge in the middle of the night and handing her a rose, for God’s sake — isn’t really respectful of her. Spike has spent the past three years zipping around the galaxy enjoying adventures, while Julia has been tied up in Vicious’s frightening penthouse, suffering verbal and physical abuse. What makes her think she’ll forgive him for that?

So Julia taking over the Syndicate, and possibly Vicious’ place as Cowboy Bebop’s main villain, is an intriguing idea, and I’m eager to see where the show will take a character that was clearly undeveloped in the original series.

However, I’m not convinced that the program has done enough to make this twist feel as genuine and hard as it should. Julia has had to be a very inward character this season due to living under Vicious’ overly watchful eye. However, the transition from “I want my abusive spouse to die” to “I want to head a galactic mafia” is a significant one. After enduring so much horror at the hands of the Syndicate, would Julia really turn down the chance to disappear into the night – not with Spike, but on her own? Why double back on an institution that has only caused her misery? Why would she let Vicious to live?

Those are probably questions for another season (if Cowboy Bebop is renewed) — and for now, that’s probably enough. This is a series concerned with jazz rhythms; perhaps Julia was always just improvising, and this is where all of her riffing led her.

In the grand tradition of any good noir, our characters finish the finale with a feel-bad ending in which no one gets what they desire. Faye gets the closest to a happy ending when she takes her belongings and sets out to discover who she truly is — but she still has to leave her new surrogate family behind. Jet is injured, estranged from his ex-wife and daughter, and so enraged with Spike that he threatens to murder him if he ever sees him again. Spike, who had spent so many years fantasizing about his long-lost love, only had about five seconds of happiness before she shot him out of a stained-glass window. For the time being, all he can do is lick his wounds and slug whiskey. Have better luck the next time. See you later, space cowboy.

• As for the stinger, it’s no big deal to reveal that the really wacky kid that wakes Spike in the alley is Radical Ed, who was mentioned briefly in “Binary Two-Step.” Ed is a beloved character in the original anime, but watching their entire story in live-action… well, it’s a lot, and I can’t say I was left wanting more.

• Ed also mentions Volaju the Butterfly Man, a character from the anime who may be read about here if you don’t mind potential season-two spoilers.

• “SEE YOU SPACE COWGIRL, SOMEDAY, SOMEWHERE!” was also used as the final text of the original anime’s 24th episode. It’s difficult to tell whether this is referring to Ed, Faye, Julia, or any mix of the three.

• “Rain” (as Spike climbs the chapel stairs) and “Green Bird” are two classic music cues in the climax (as Spike falls out the window).

• For a brief moment, Faye and Gren become immediate friends, and honestly, I’d watch an entire Cowboy Bebop episode of those two getting drunk and chatting in the bar.

• I don’t mind most of Faye’s cornier comments, but “Welcome to the ouch, motherfuckers!” should have been removed.

• I suppose I’d be upset if my ex-partner had our daughter taken, but I’m disappointed that Alisa and Chalmers have turned against Jet again again. It was lovely to see everyone in “Galileo Hustle” being so polite to each other.

• Cowboy Bebop season one has come to an end! What were your thoughts on the adjustments they made? Do you want a second season, and if yes, what would you like to see? Please share your ideas in the comments section below.