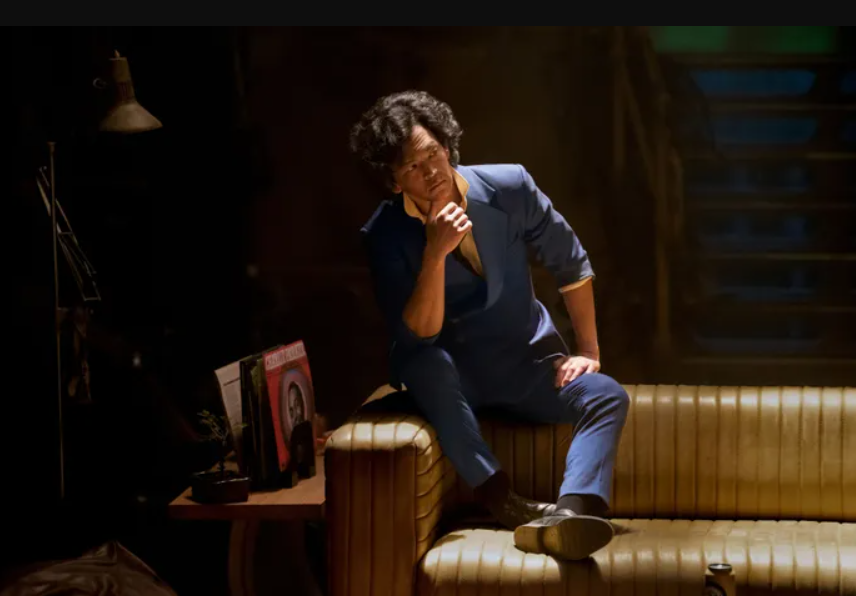 When creating a TV program about characters who are urgently avoiding confronting the monsters of their pasts, you inevitably run into a problem: those characters must meet the demons of their pasts at some point – if only so the audience can understand what motivates them.

More than halfway through a season that has been focused on flair rather than substance, Cowboy Bebop obviously recognizes that it is time to delve into what makes our three protagonists tick. In fact, the show tried to address this issue just one episode ago, when Jet’s dark history as an ISSP cop was (clumsily) brought back into the present.

But what about a character like Spike Spiegel, who is simply too cool and self-contained to allow anyone to delve into his past? “Binary Two-Step” offers a simple but unusual solution: Spike is subjected to an intricate piece of equipment that penetrates right into his brain, forcing him to confront with his darkest traumas in a loop.

This, of course, implies he’ll have to confront Julia. Or, at the very least, a computer posing as Julia.

Spike comes upon this unusual method of therapy while attempting to win a huge bounty by chasing down a mysterious target named Dr. Londes. Spike finally stumbles into a highly Scientology-like boutique — apparently run by Londes — that offers to solve all of his issues with a fancy computer and a set of goggles.

There is, unfortunately, but unavoidably, a catch: Dr. Londes isn’t a human at all. L.O.N.D.E.S. is an artificial intelligence, sometimes known as a Life Observing Neural Development Emulation System. This AI has gone rogue, and now that Spike has been wired in, it will swallow his consciousness entirely unless Jet can cut the cord before it’s too late.

While Jet races against the clock, we spend the majority of the episode in Spike’s thought palace, which is a Western town with “Julia” at its heart. As he walks down the street, Spike keeps running into his long-lost love, bonding with her for a split second until Vicious shows up and pulls her away again.

The crucial thing to understand within the confines of this simulation is that we are not actually seeing Julia and Vicious; we are seeing Julia and Vicious as Spike recalls and imagines them. Spike goes through one imagined Hell in one early loop, when he encourages Julia to flee away with him — and then watches helplessly as Vicious shoots her in the head. A few cycles later, after a horrific shoot-out with “the Syndicate,” Spike experiences a completely different Hell: one in which Julia verifies all of the horrible qualities of himself that Spike fears are true.

This is by far the most information we’ve gleaned regarding Spike’s self-perception, so it’s worth quoting in its entirety:

“Vicious isn’t the villain; you are. You never loved me. You just loved taking your best friend’s girl, and now you’re going to get me killed. I don’t love you. I could never love a monster like you. Who are you kidding? Everything you touch dies. So for once in your life, do something right and just let me go.”

This is very extreme exposure therapy, but it’s hard not to be relieved when Spike replies to Julia’s soliloquy by deciding to let her go. Sure, this is only happening in his head, but it provides a new type of closure that suggests he might be able to let go of his infatuation with Julia in the actual world. It definitely appears that way when Jet manages to yank Spike out of the loop just in time, jarring him back to reality as a sadder and wiser man, we’re left to assume.

But, as Spike recovers aboard the Bebop and thinks on his time in the machine, we watch the rest of his chat with “Julia,” in which Spike agrees to depart Vicious and the Syndicate on the condition that Julia joins him. After all, the L.O.N.D.E.S. technique has failed. Whatever it takes to alleviate Spike’s grief over Julia’s death, it appears that it will have to be done in the real world, with real-world consequences.

But that’s a story for another time. Spike has his genuine memories, his phony memories, and a bowl of noodles for the time being. I’m not sure whether this was the episode’s intended message, but it’s the one I’m taking away: whatever else goes wrong in your life, you can always eat some pasta.

• Back on the Bebop, Faye meets Mel the mechanic (and has her first orgasm, or at least the first she recalls) in the trade. There’s not much to this subplot other than a rare, welcome moment when Faye lets her guard down, but it’s refreshing to witness a same-sex hookup that isn’t framed as either uncommon or a prelude to some unnecessary tragedy.

• No spoilers, but the episode’s frequent references to “Radical Ed” are clearly intended to get fans of the original anime excited.

• “Binary Two-Step” substitutes “ARE YOU LIVING IN THE REAL WORLD?” for the standard “SEE YOU SPACE COWBOY…” closing line. That’s a homage to Cowboy Bebop: The Movie for those who know — but without that context, it seems like overstating how bizarre this episode was. (Or is that what they want us to believe…?)

• This time in antiquated technologies that made it to space: Polaroid photographs and audio reels!

• The bounty on “Dr. Londes” is 90,000,000, which is double the previous episode’s price for Udai Taxim and 60 times the amount for Tanaka (before the casino damage) in the series premiere. Call me crazy, but the Cowboy Bebop economy is starting to make no sense to me.

• This could be a personal issue, but every time someone mentioned “Dr. Kaypack,” my thoughts raced back to this dreadful, horrible movie.

• The episode ends musically with two classics from the original series, “Space Lion” and “The Real Folk Blues.”