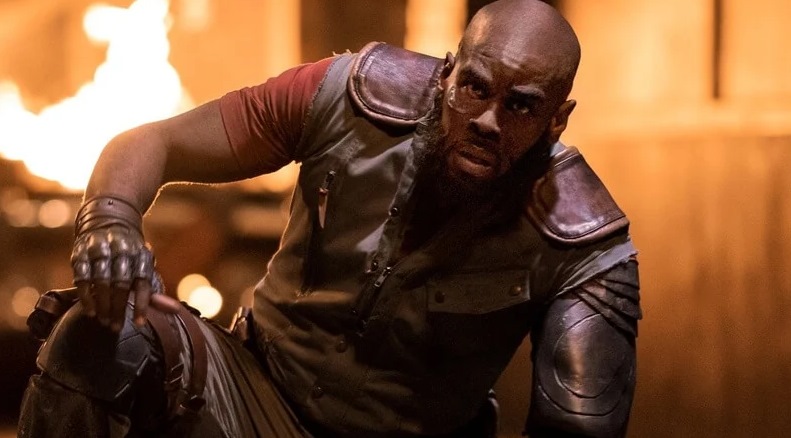 Jet has been seeking a particularly wacky MacGuffin since the first episode of Cowboy Bebop: a Walking Sally doll, which he intends to present his 8-year-old daughter for her birthday. This futuristic Cabbage Patch kid has never been far from his mind as he zips around the Milky Way, shooting crooks and dragging criminals into ISSP stations.

So when Jet and Spike learn about a particularly large bounty on Mars — one that could theoretically cover the cost of an entire toy store’s worth of Walking Sally dolls — they jump on it. (I’m not sure how the Cowboy Bebop economy works, but the prior two episodes’ bounties were 1,500,000, 2,500,000, and 2,000,000, respectively, so the 15,000,000 on offer here sounds like a significant deal.)

The hunt is on for a strange assailant who is killing wealthy individuals and disappearing with their dogs, which I suppose explains the exorbitant reward. It’ll be especially difficult to find him because he’s utilizing an intriguing piece of future technology to display another visage on top of his own.

Jet reluctantly calls on an old contact named Woodcock in their search for the man, who shows up oozing with passion for him. I’m not sure how the program intends for us to react to this transaction, but I thought it disgusting and not in a good manner. Jet accepts being referred to as “a tall glass of creamy chocolate milk” by someone he definitely does not want to hook up with in return for knowledge. Woodcock, in turn, is treated as inherently ridiculous and unattractive for being an older woman who is openly interested in sex.

Woodcock’s information is sufficient to lead Spike and Jet to the Martian brothels, where prostitutes utilize face-changers to give their johns anything they actually desire. (This is a theoretically interesting idea — how does it feel on both sides? — but it’s mostly just window dressing here.)

The trail eventually leads to a leather-clad domme who spanks a bound man and shouts in German before identifying the killer, in addition to enabling Spike to enjoy a cigarette while dangling between a gigantic set of breasts on a brothel billboard. It’s a man named Hakim, and he’s hungry for the wealthy.

Since Tanaka’s anti-capitalist speech at the start of the series, Cowboy Bebop has flirted with class commentary, but this is the first time I feel like the program has really gone for it. When Spike and Jet catch up with Hakim, he admits that his motivation was hatred for money, not money. When the Earth Gate blew up, Hakim wanted vengeance on the rich individuals who opted to evacuate their pets while abandoning poor people like his parents, who were part of the working class. (I’m sure more will be revealed later, but if you don’t mind spoilers, this is a pretty good explanation of what happened in the original anime.)

If we’re not supposed to agree with Hakim’s choice to murder wealthy people and kidnap their dogs, we’re supposed to sympathize with the horrific occurrence that drove him to this place and his realization that he can’t kill the dogs for something they didn’t do. Hakim despises himself and is willing to die quietly.

But, if the end lesson is that you can’t be angry with water because it’s wet, I guess Spike and Jet can’t be angry with the space officers since they’re space corrupt. It turns out that this job has been rigged all along, in a particularly noirish twist. Chalmers and his ISSP comrades arrive and murder Hakim, effectively putting an end to Spike and Jet’s chances of collecting the bounty. Instead of the illusive Walking Sally doll, the cowboys receive a consolation prize: a lovely corgi named Ein, whom Jet gives to his daughter.

For about 30 seconds, it appears like a fantastic solution to Kimmie’s birthday narrative – until Jet’s ex-wife insists on him taking the puppy back with him. The Bebop appears to have a new crew member.

• The quest for Hakim is temporarily interrupted by a sequence that doesn’t contain Spike, Jet, or Vicious at all, which is unusual for this series thus far. Julia instead comes up at Ana’s bar and seeks advice. Julia tries to downplay Vicious’s physical assault when Ana observes her injuries, but Ana pushes that she assert her own power. Theoretically, this live-action version allows for a dramatic rewriting of the original series’ gender politics. That’s a potentially rich vein for this new show to delve into, and I’m hoping what they’re hinting at here isn’t just a feint.

• Apart from a scene in which Vicious and his gang execute a group of naked people they’ve hired to produce Red Eye, and a capper in which Spike calls Vicious and fires a warning shot through a vehicle window, there wasn’t much movement on the broader Syndicate plot in this episode.

• Tharsis City is named after a real place on Mars, where the planet’s greatest volcanoes can be found.

• Spike and Jet mention a task they conducted in Alba City, which is prominently featured in the animated film offshoot of the original series.

• Spike’s rooftop standoff with Hakim includes an overt allusion to Sergio Leone’s The Good, the Bad, and the Ugly’s ending, with a closeup close-up shot of each man’s eyes moments before they start firing.

• At the time of writing, urbandictionary.com does not have an entry for a “Alabama Anaconda,” but I’m confident that by the time you read this, it will.