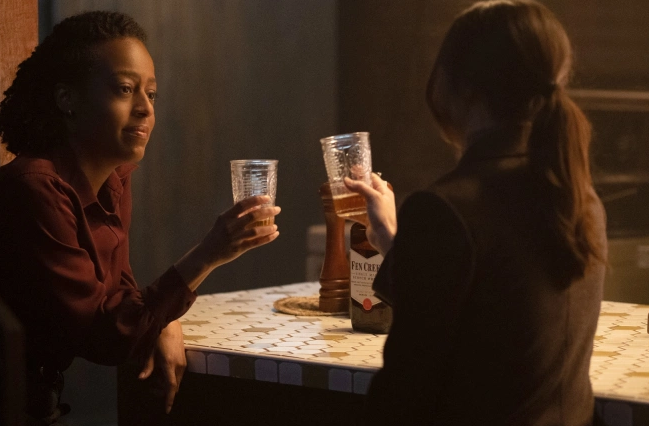 “There is a time when staying silent costs more than telling the truth,” said Murray Clark, the ViCAP team’s short-sleeved, dress-shirt-wearing, working stiff. He was the throwback in a group that is supposed to be the future of the FBI. This is to show how confidential informants work, and when to increase the pressure to provide useful information. He could also be talking about the entire episode, “Silence Is Purgatory”, after a line from one of its most memorable conversations. It is about the line between speaking up or shutting down and the costs of each alternative.

It’s quite simple from a plot standpoint. Clarice and her team continue to investigate the conspiracy behind the so-called River Murders. These are all linked to trials for a drug called Reprisol. (Reprisol is reprisal, potato po-tah to), which is in turn tied to corrupt DC legal eagle Joe Hudlin. Clarice is looking for leads everywhere she can. This includes Tyson Conway (Douglas Smith), a well-meaning son of Big Pharma execs he barely knows, and Julia Lawson (Jen Richards), an accountant for the pharmaceutical company that continues to pay doctors huge amounts to prescribe the stuff.

Tyson is able to connect with her quarry because they were both abandoned by their parents, making them feel like disposables. However, Julia’s sotto-voce hostility to Clarice’s mention suggests that there is something more at work in this dynamic. Even though she has given Clarice key evidence, Julia still has something to share with Clarice: She is transgender and Clarice helped her through the media storm surrounding the Buffalo Bill case.

This brings us back again to The Silence of the Lambs. It is still controversial and a masterpiece that Clarice grew from. And the legacy of transphobia it left behind. People naturally focus on the scene where the serial killer Buffalo Bill applies his makeup and tucks into the mirror. But that’s not the real Bill. It’s just an illusion. The real Bill is out taunting Catherine Martin, where he mocks her screams at the bottom of the well. He pulls at his shirt to imitate having breasts in cruel pantomime womanhood meant to injure and insult. He is wearing a dead woman’s scalp as a hairpiece in the tucking scene. Bill isn’t trans, as Clarice and Hannibal Lecter both state in Silence of the Lambs. He is just a dime-a-dozen misogynist who kills women out of hatred and resentment, not because he himself is one.

The world of Clarice is not more nuanced about Bill’s crimes than it was 30 years ago. The shitheads who are transphobic will always use Bill as a cudgel. Given that Clarice revolves around Bill more than Hannibal the Cannibal’s, it is important for the show to address this issue head-on. These concerns were raised by hiring a trans actress as a transwoman to voice them. This is a worthwhile move. It’s just a bonus that they gave Hudlin’s sly and sleazy use of Julia’s deadname as a way to add weight.

Dramaturgically, this subplot is the most fascinating. It fits seamlessly into an episode about secrets and the person who is asked to shoulder their burdens. For Paul Krendler, the secret is allowing himself to fall off the wagon in order to stay in the good graces of his lawyer-slash-blackmailer Hudlin, who himself is threatening to out the secret of Paul’s estranged wife Mandy’s own problem drinking. Clark believes Paul is telling Clark, rather than his sponsor. Clark claims that Paul was looking for an excuse not to relapse.

Clark believes the secret is his informant’s immigration status. He uses this information to get the information he needs, much to Esquivel’s dismay. This secret comes back to bite Clark in the form of the dead body of the informant, which has been made to look like a suicide by Hudlin (the very person she was informing). Clark seems to have been playing with fire; it was only a matter of time before someone got burnt.

Esquivel believes the secret lies in his past as a military spy. He fears that it will alienate his girlfriend who was a paramedic at the worst mass shootings in America. It now ranks fifth in the USA! Clarice attempts to convince him — though naively, let’s be honest — there is a difference between killing and being a soldier. Esquivel is not so certain.

Ardelia Mapp believes that the secret to the FBI’s discriminatory treatment of Black agents is not the burden they place on them, but Clarice’s need to use her as a counterexample in order to force the Black Coalition to file a lawsuit against it. Clarice gets a heads-up from Ardelia at the end, and Clarice accepts it. The lawyer in the case is a veteran of a discrimination suit within the Bureau regarding Latinx agents. Despite the suit’s success and the hostile climate that followed, he and many of the other involved agents left the FBI shortly thereafter. This is not an inspiring example.

Catherine Martin, who is finally freed from her isolation in her family home, only to be re-dumped again by the man she was seeing when Bill kidnapped and raped her, has a big secret: She plans on killing Bill’s abusive mother. Clarice will intervene in the nick of time to stop him from becoming the hunter. Clarice is an excellent writer, who is always a bit more creative than necessary and much more kind-hearted than it should be.