It’s never a bad idea to have a ranged weapon in your arsenal in Amazon’s MMO “New World”, whether you’re fighting off hostile players from the opposing group or dealing with terrifying NPCs. Ranged weapons like the musket and bow, on the other hand, require ammo. Using a ranged weapon on a regular basis will quickly deplete your ammunition supply, which you can obtain through looting the environment, and acquiring more ammo might be tough in the early stages of the game.

Thankfully, producing ammo in “New World“ isn’t difficult, although it does necessitate some research. Before you can make munitions like iron cartridges for the musket or flint arrows for the bow, you’ll need several different sorts of materials that must be transformed into another resource. Here’s where you can get the supplies you’ll need to become a marksman in “New World”.

How to find materials for the muskets 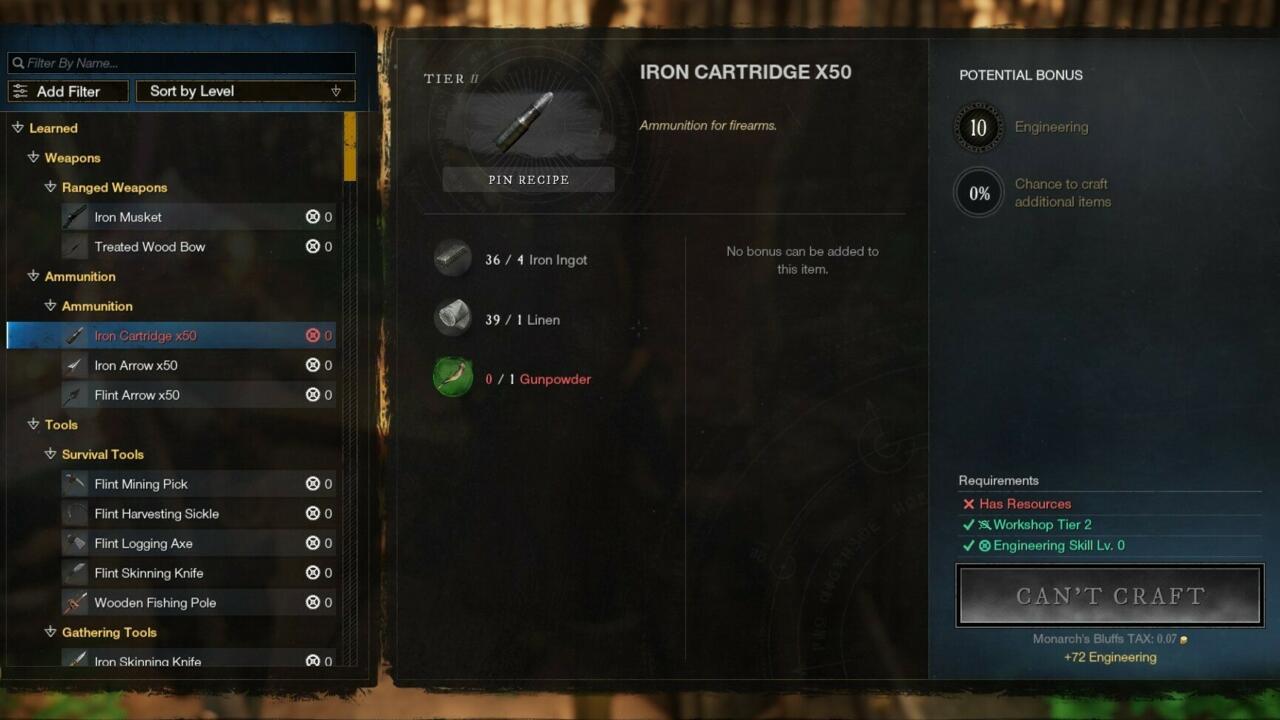 In order to have a suitable supply of ammo, individuals who want to transfer a little Old World technology into the “New World” in the shape of the musket will need to acquire a few different sorts of raw materials. The production of iron cartridges for the musket is a two-step procedure. You’ll need to start by making gunpowder. To produce gunpowder, you’ll need the following ingredients:

Greenwood, which is needed for charcoal, can be obtained almost anyplace there are trees or bushes, while saltpeter may be discovered in caverns throughout the game. Flint is found all across the environment, although it is most common around bodies of water. It’s time to build some ammo now that you’ve got your gunpowder. To produce iron cartridges, you’ll need the following items:

Smelting raw iron, which can be discovered in numerous quarries throughout the game’s beginning sections, produces iron ingots. Things get a little tricky when it comes to making the linen. To do so, players must locate hemp plants and collect the fibers, which may then be transformed into linen using a loom in any village. Hemp is hard to come by in the beginning of the game, as it grows predominantly in meadow-like areas. Hemp may be found in huge quantities throughout “New World’s” Windsward territory, as well as in smaller field-like locations like Everfall, Monarch’s Bluff, and First Light. 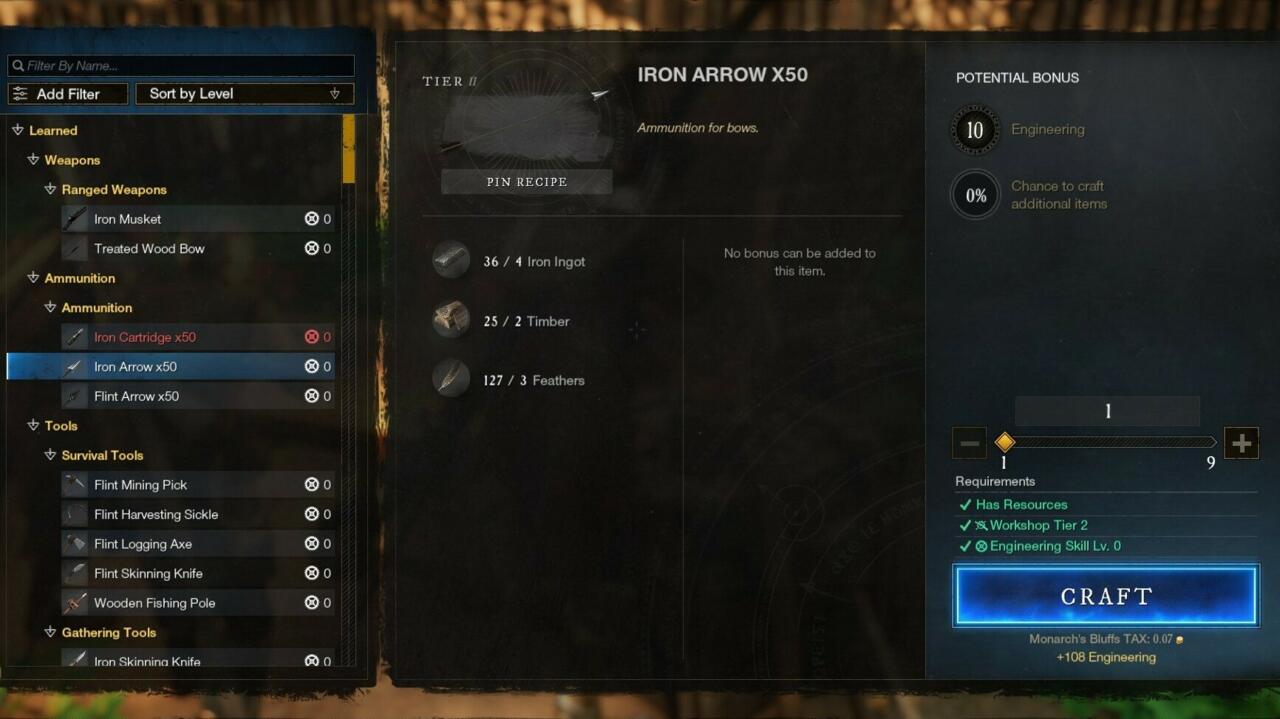 Archers who are just getting started in the “New World” will want a regular supply of arrows. Fortunately, creating arrows is a lot easier than making musket ammunition. To produce a batch of flint arrows, you’ll need the following materials:

Greenwood can be obtained in bushes or young trees, flint can be discovered near the shore or bodies of water, and turkey feathers can be harvested from roaming turkeys. Simply replace the flint with iron ingots and transform your greenwood into timber along with the appropriate feathers to generate better damage-dealing iron arrows. Arrows are made in any settlement’s workshop.

How to make better ammo 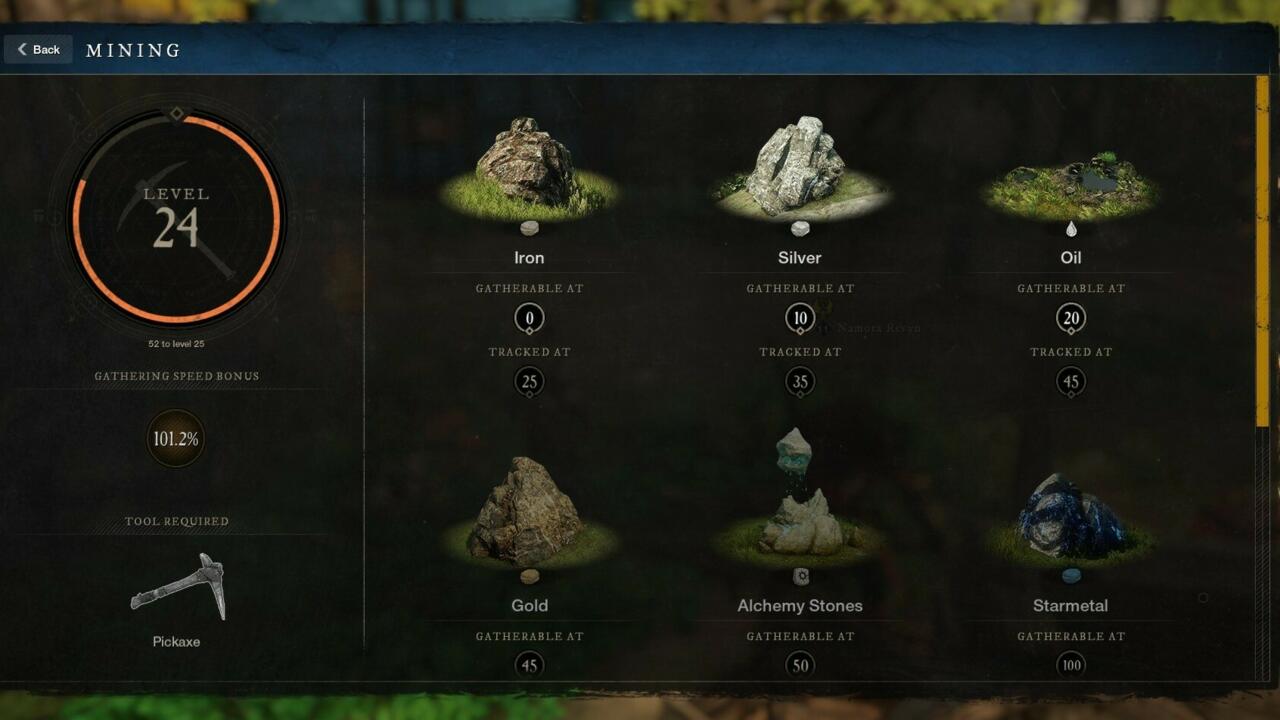 Upgrades to better sorts of ammo follow the same guidelines whether you’re creating cartridges or arrows. You’ll always need gunpowder and linen for musket ammunition, but the metal ingots you utilize may vary. Steel ammo, for example, will require steel ingots all the way up to orichalchum cartridges, the most potent ammo type. Feathers will always be needed for arrows, but the quality of wood and metal utilized will improve. If you’re an archer, make sure to level up both your logging and mining skills (or just mining if you’re a musket user) on a regular basis, as these will be required to gather the resources needed to craft better ammo and keep your weapons dealing as much damage as possible as you progress through the game.

TV Show “Y: The Last Man” Has An Early Reviews