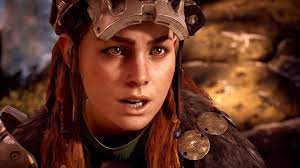 “Horizon Forbidden West” narrative director Ben McCaw explained to Kotaku why Guerrilla chose not to show reborn CEO Ted Faro. McCaw explained that he and game director Mathijs de Jonge agreed that Faro should not be shown for two reasons: first, “it’s not a horror game,” as McCaw puts it, and second, whatever the player imagines is likely scarier than what the game can display.

“What’s hiding in the shadows is far, lot scarier—the picture that your imagination conjures up—than the tacky Hollywood rubber costume that you show,” McCaw said of the choice not to reveal Faro in all his, well, splendor. “That was something we didn’t want to do. We wanted it to stick with the player.”

As things stand, the player is just allowed to speculate what the former commander of Zero Dawn looks like. When Ceo runs towards what’s left of Faro, all we hear is a bone-chilling roar, followed by Ceo scampering away with his tail between his legs.

Perhaps, almost a thousand years after civilization’s demise, we’ll never discover what Faro truly looks like. For what it’s worth, McCaw depicts the villain as a “human cancer, a big malignant growth,” adding that he imagines the figure as a “kind of disease on humanity.”

In a Launch Message, “Halo Infinite” Wants You To Feel Like a Hero