“Halo Infinite”, which was first revealed during Microsoft’s E3 2018 press conference, has been plagued by delays from developer 343 Industries. The Master Chief’s latest adventure is almost coming, which is good news for lovers of the franchise. As players get ready to play “Halo Infinite” in December, gaming technology manufacturer Razer has announced a new collection of “Halo Infinite”-themed gaming gear.

Razor is unveiling a new line of “Halo Infinite”-inspired goods. Razor is known for its gaming equipment such as performance gaming chairs and mice. This set comprises four items that can be used on both a PC and a console. The new designs of some of Razer’s popular gear were inspired by the renowned MJOLNIR armor used by the Master Chief throughout the series, according to the business. Each item of gear purchased comes with an in-game prize in addition to the new designs. These items are currently available for pre-order at Gamestop and on Razer.com until September 27. On October 21, they will be accessible.

Some of Razer’s most popular goods, such as the Razer DeathAdder V2 mouse, are included in this list of “Halo Infinite” related gear available for pre-order. This new design features gold accents on the mouse buttons and a green and black color scheme. Those who purchase this new design, which costs $79.99, will receive the Fangs Emblem when the game is released. 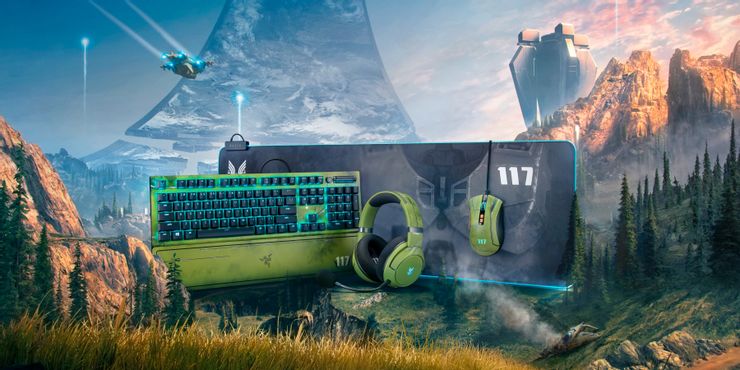 The Razer BlackWidow V3 keyboard was introduced to suit the updated style of the DeathAdder V2. The traditional 117 is written in the corner of the wrist rest in this new design for the gaming keyboard, which has a weathered green appearance. The Deathly Poison Weapon Coating in-game prize is also included in this keyboard, which costs $179.99.

Razer also revealed a “Halo Infinite” design for the Razer Kaira Pro, in addition to these two gaming peripherals. The Master Chief’s signature green, as well as the UNSC logo, are included on this headset. The Deathly Poison Armor Coating in-game prize is included in this headset, which can be pre-ordered for $169.99.

The Razer Goliathus Extended Chroma is the final piece of gaming equipment in the new Halo Infinite series. This mouse pad incorporates RGB lighting and a Zeta Halo-inspired design. Purchasers of this mouse pad, which costs $79.99, will receive 5 Challenge Swaps as an in-game incentive.

This isn’t the only new merchandise available ahead of the game’s debut. The “Halo Infinite” Xbox Series X console has been announced by Xbox. Stars on the upper half of the console, as well as a blue vent inspired by the AI Cortana, are some of the elements of this streamlined design. A new Halo Infinite Elite Series 2 controller will be released alongside this limited edition console.

According To a Report, “Elden Ring” Is the First FromSoft Game To Use Simple Anti-Cheat