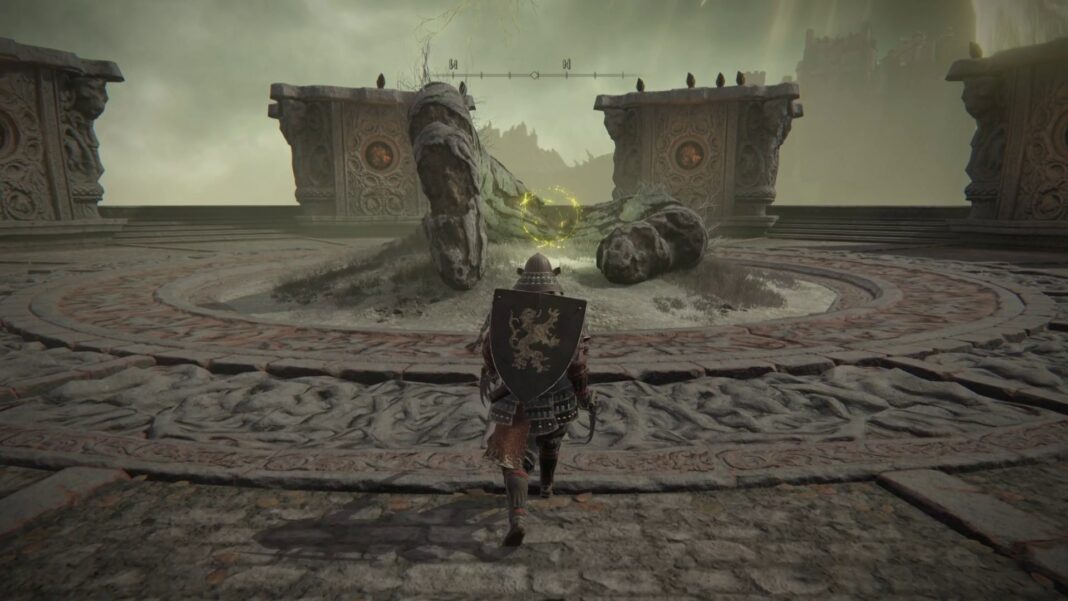 You might feel a little underpowered early on in FromSoftware’s latest game, “Elden Ring”. While that sensation is an intended feature of the game, there are a few ways to earn some early runes and advance a few levels faster than you could otherwise. In “Elden Ring”, you must first complete a few crucial tasks, such as traveling to Gatefront Site of Grace, where you will receive Torrent the spectral horse, and the ability to level up using runes. Depending on how confident you are in your abilities, you can travel to a few different farming locations from here. 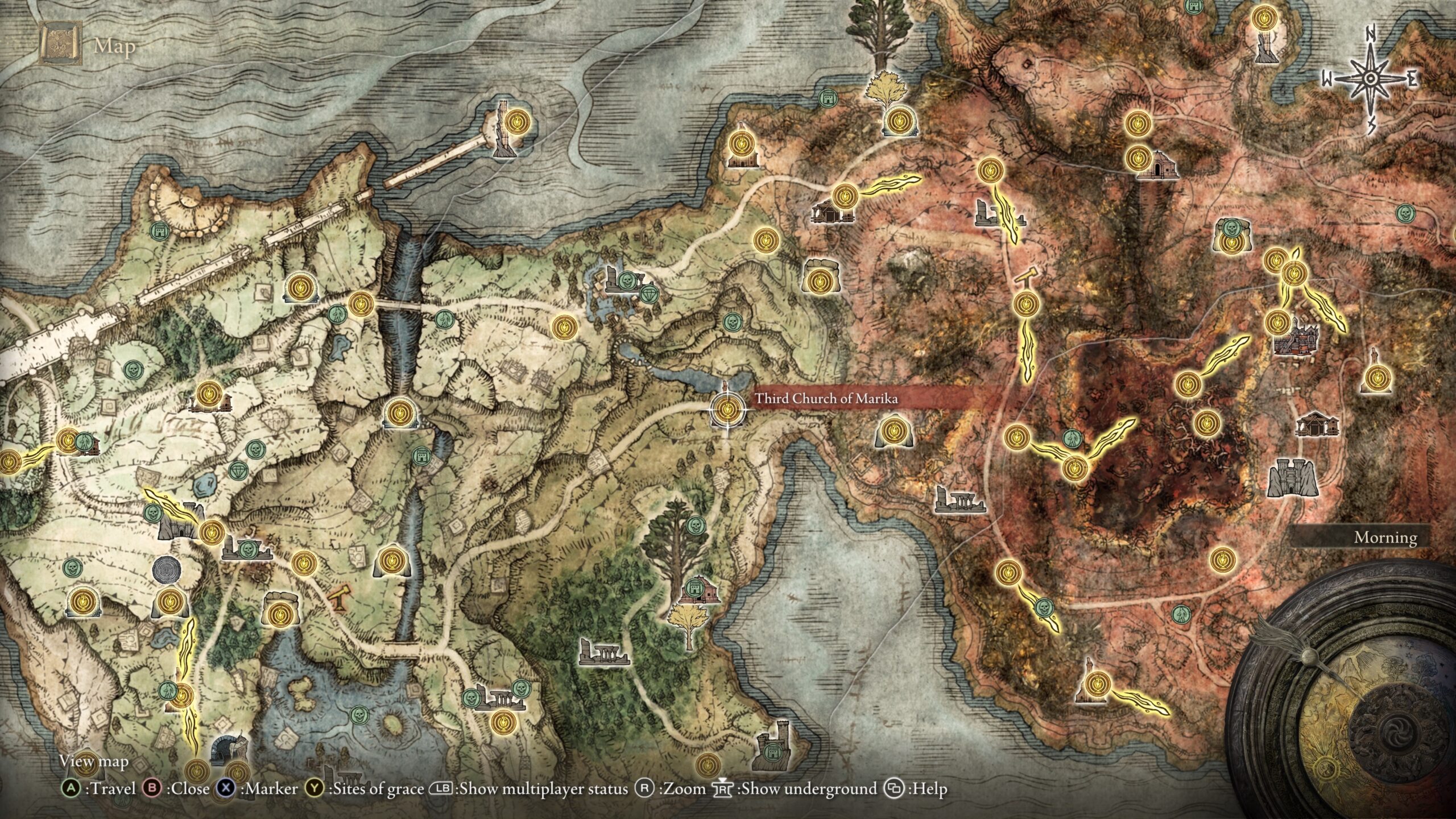 Early on in the game, the best farming area is really a higher-level location that you can access via a warp gate. You must first locate the Third Church of Marika, which is located in East Limgrave, in order to go there. Starting at the Gate Front Site of Grace and following the road heading east is the easiest method to get here. After crossing a bridge, take the way north and follow it until you come to a halt in front of the church. This place is not on the initial map fragment you uncover, but you can gain the East Limgrave map fragment by continuing on the route after the Third Church of Marika.

Since you’ve already arrived at the Third Church of Marika, go inside and activate the Lost Grace while grabbing the Flask of Wondrous Physik. Follow the river on the north side of the church east until you come to a warp gate hidden behind some trees. The Bestial Sanctum can be reached via this warp gate.

When you enter the Bestial Sanctum, you will be greeted by a massive foe standing straight in front of you. You won’t want to battle this boss until later in the game, but if you don’t assault it or get too close to it, it will leave you alone. Turn around and enter the Sanctum, where you’ll discover a Site of Grace and the Gurranq, Beast Clergyman, whom you don’t need to worry about right now. After that, go outside and start seeking some little, black-hooded adversaries that may be lurking around. These foes will be difficult for a low-level player to defeat, but they don’t have a lot of health. They also tend to stand alone, allowing you to sneak up on them for a critical attack. 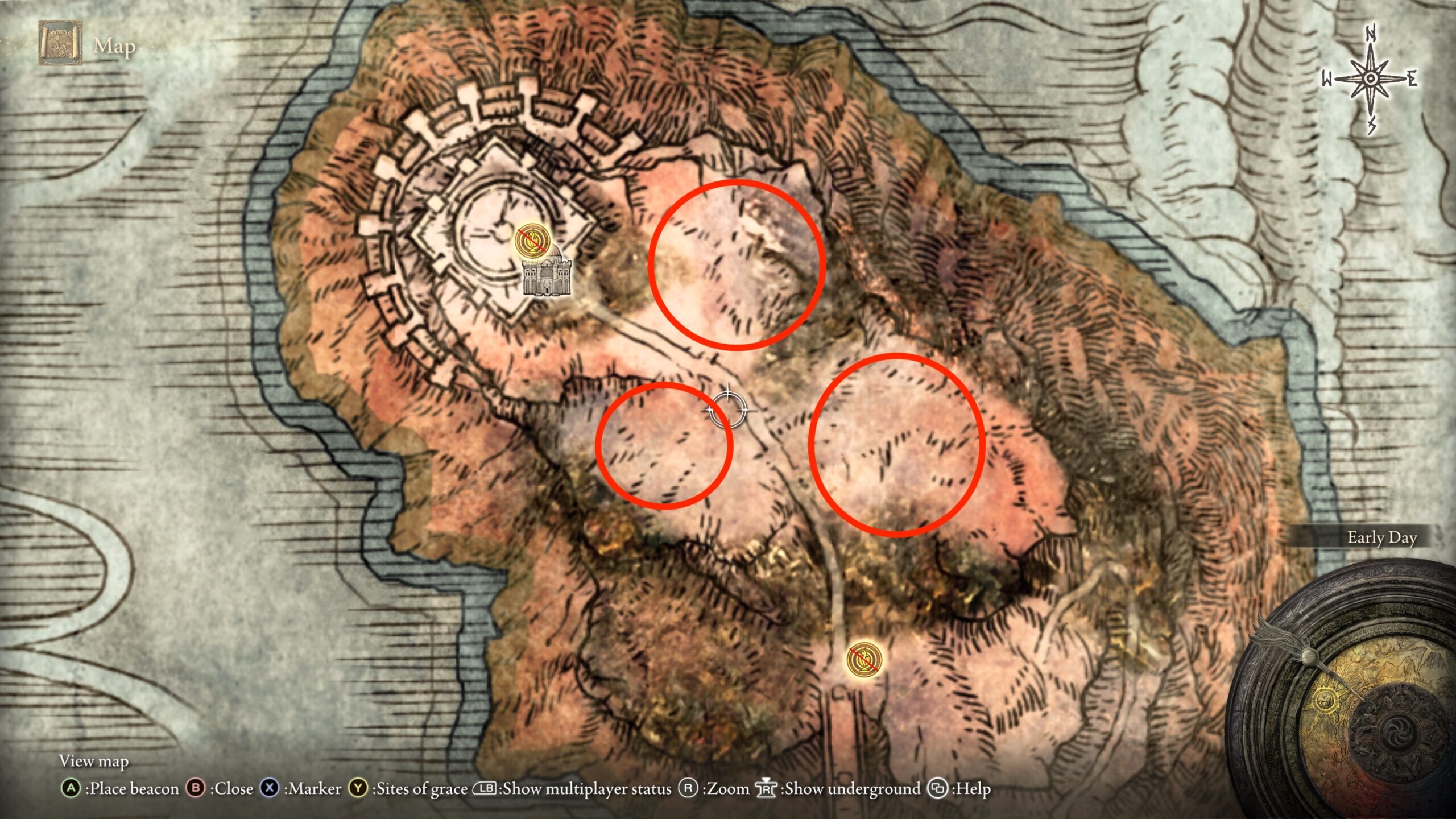 Depending on the enemy’s weapon, each one will pay you between 1,000 and 1,300 runes, which is a substantial number early on in the game. This place is especially advantageous because it is simple to ride in on Torrent, snag your runes, and then ride out if you are killed by one of them. The Sanctum’s Site of Grace also allows you to rapidly reset the opponents. If this area proves too difficult, there are a few additional options to consider. 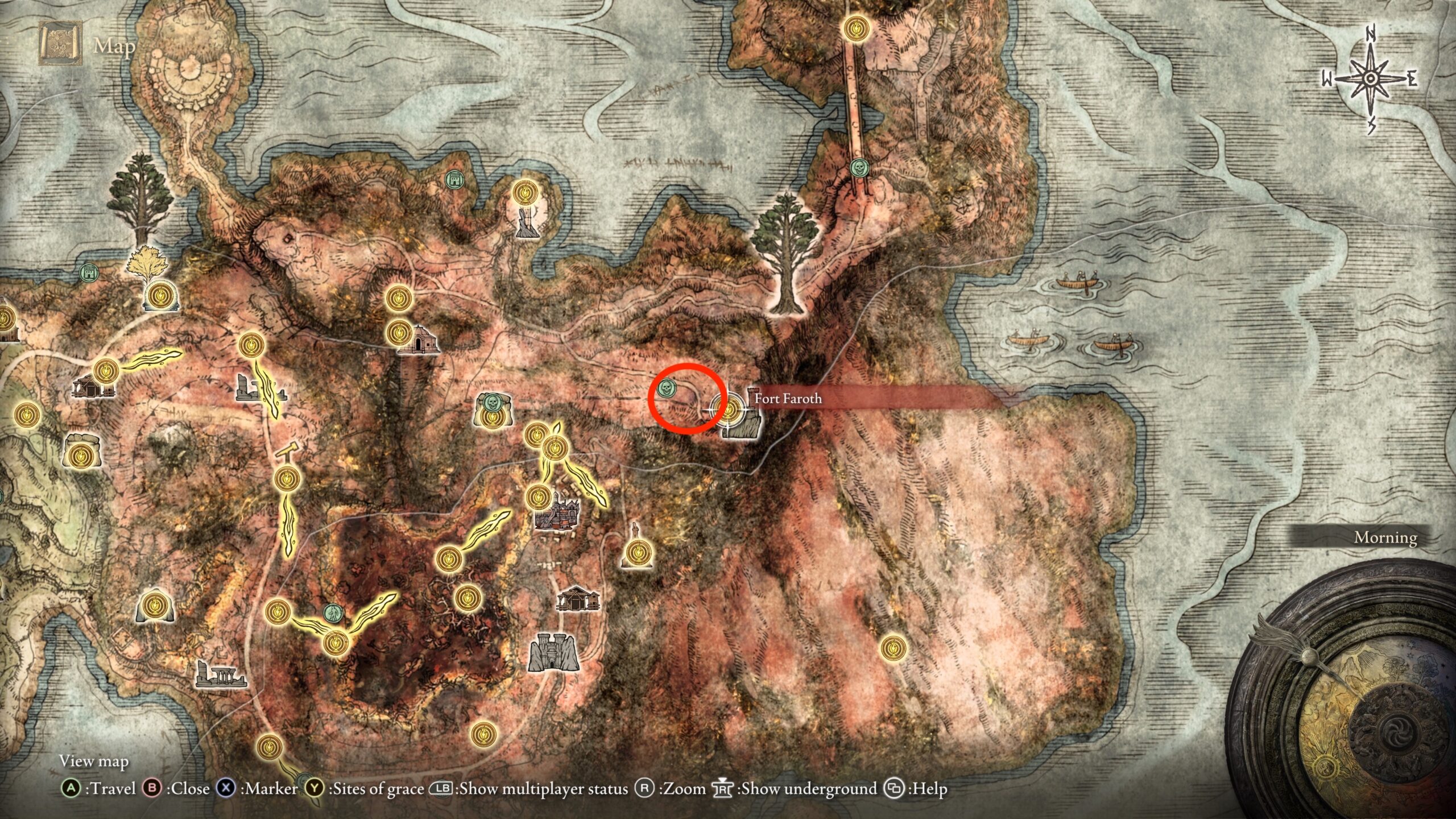 The following method allows gamers to easily obtain 80,000 Runes if they are willing to embark on a short journey. Caelid, in the map’s eastern area, is where players should go. The place can be found by following the dirt roadway northeast of Limgrave. The fort is situated in Caelid’s northern middle part. The Site of Grace, as well as your target, a large sleeping dragon, are both immediately outside the fort.

You can stand close to the dragon’s backside and attack it continually without it or any other adversary attacking you if you approach it from the Site of Grace. This process will take a long time depending on your level and weapon. If you have a weapon that causes blood loss, use it to help speed things up. When you vanquish the dragon, it will perish along with the smaller dragons on the other side, earning you 80,000 Runes. The dragon, as well as the smaller dragons, will not respawn once they have been killed.

If you don’t slay the great dragon, the smaller dragons, which number five or six, can be farmed for 3,500 Runes each. The smaller dragons will respawn every time you visit a Site of Grace as long as the great dragon is alive. The disadvantage is that, although spawning with half a health bar, these smaller dragons will be difficult to slay for early game players. This farming approach is better used later in the game, so you can choose whether to grab the 80,000 Rune bonus now or wait until later to farm this area. 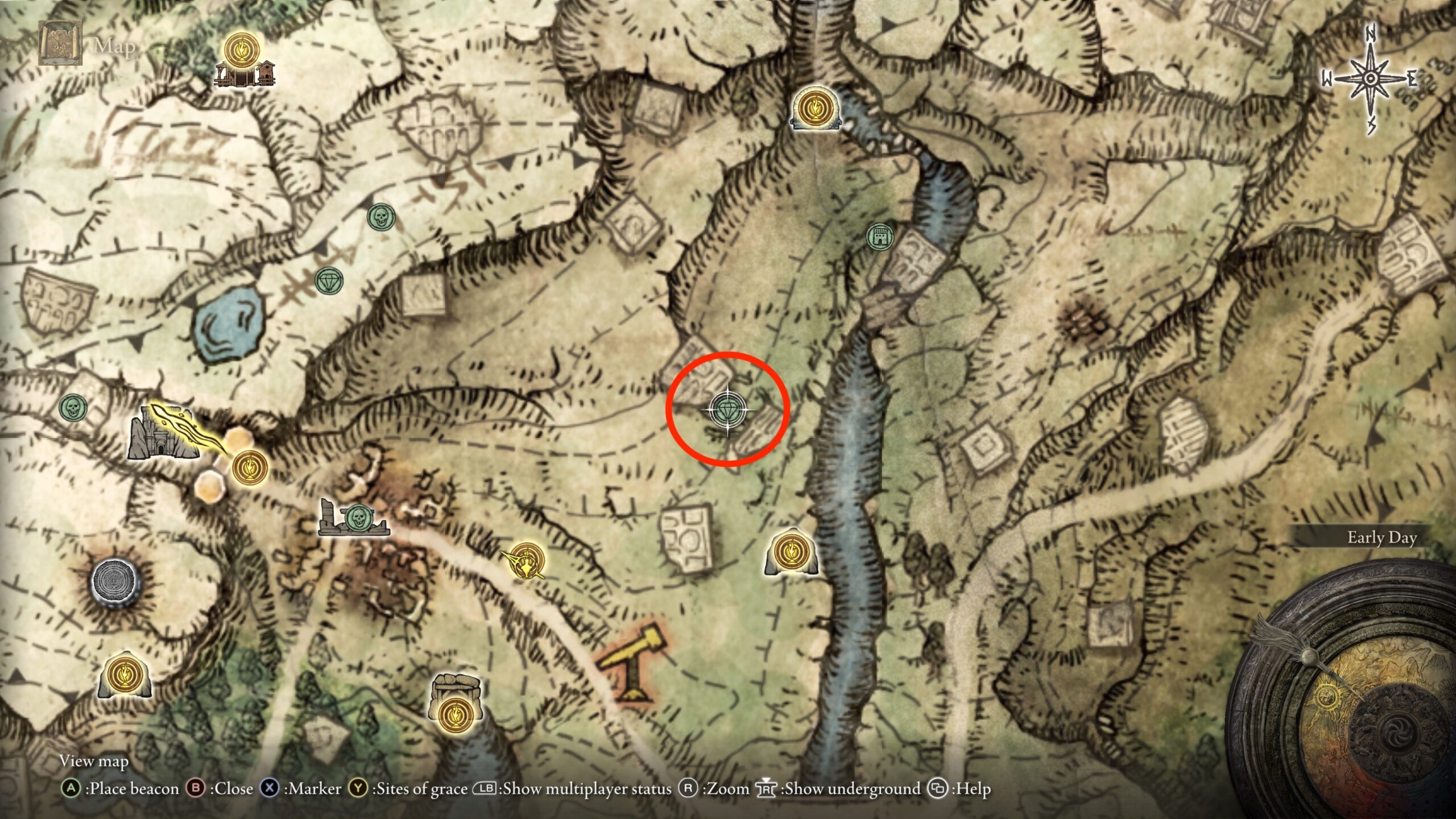 The Agheel Lake North Site of Grace is located about east of the Gate Front Ruins. A tiny Viking camp is located just northeast of the Site of Grace, with a few horseback enemies between the camp and the Site of Grace. You’ll get roughly 300 runes per horseback adversary, and clearing out the entire camp of wolves and Vikings will win you about 2,000 runes per run. The only adversaries who are a little more difficult to defeat are those on horseback, however, a few jumping heavy attacks will throw them off their mounts and expose them to a critical hit. This approach will not yield your runes as rapidly as the dragons stated before, but it will be much easier to perform without dying. The final approach yields the fewest Runes, but it is simple and quick.

577 Runes per run at the Seaside Ruins 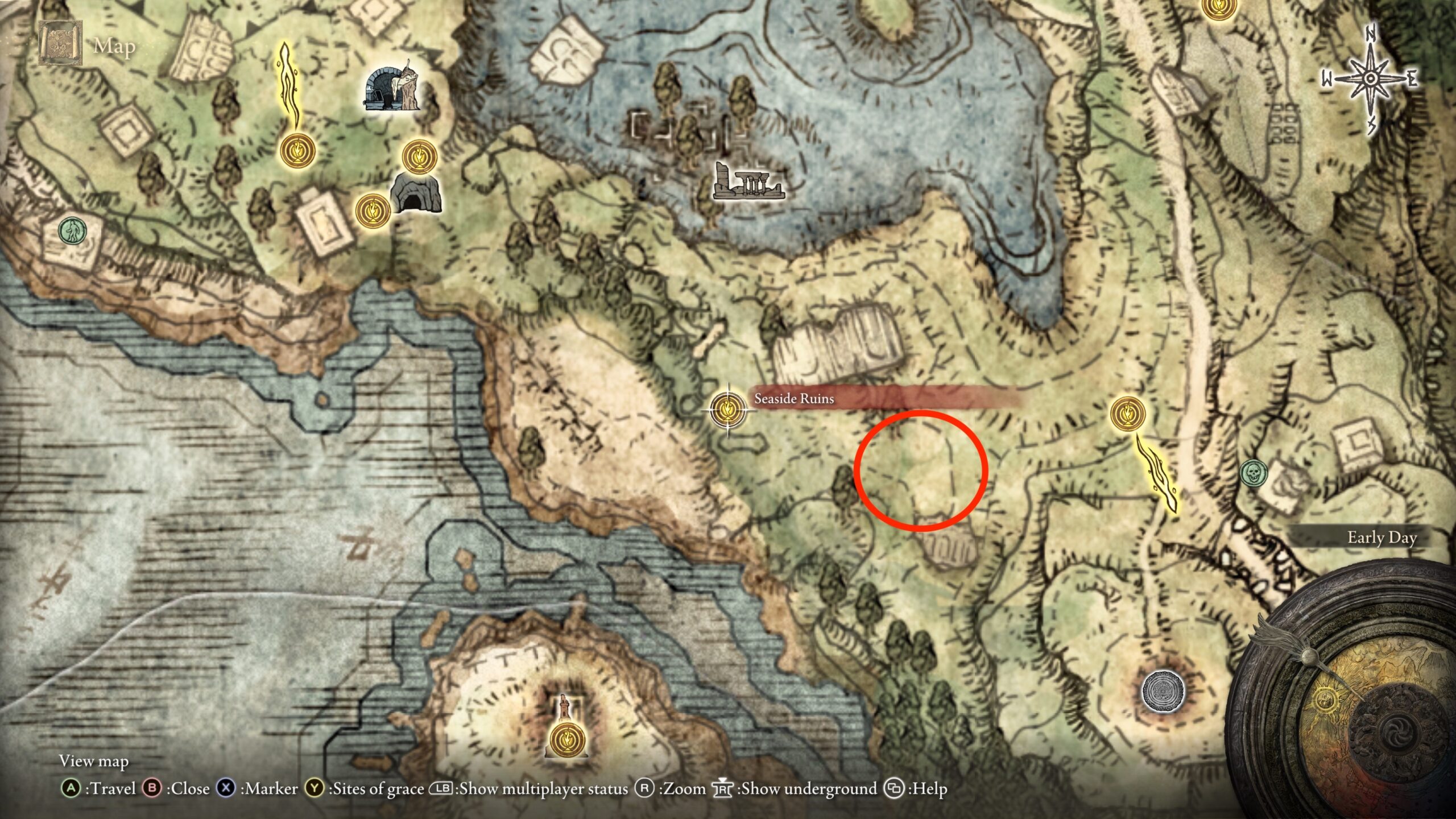 The Seaside Ruins Site of Grace is to the southeast of where the player enters the Lands Between for the first time. Players will travel east from the Site of Grace to find a group of knights fighting a bunch of goblins. Players will receive 577 Runes for taking out the entire gang, which is a small amount. The advantage of this strategy is that the adversaries are preoccupied with murdering each other, making it simple to rush in and begin killing them before they turn their attention to you. You get Runes if an enemy dies nearby, even if it is killed by another enemy. Because the Site of Grace is close by, a run should take only 2 to 3 minutes. It isn’t the most effective way, but it is the most secure.

Getting some extra levels and stat points early on in “Elden Ring” will be beneficial regardless of which strategy you employ, especially when attempting to defeat the game’s first main boss, Margit The Fell Omen.

Previous articleIn “Elden Ring”, How You Can Cure Poison
Next articleWeather Has an Impact on “Elden Ring” Spells