The minimum and recommended hardware specifications for the PC version of “Elden Ring” have been disclosed by FromSoftware, giving fans an idea of what kind of computer they’ll need to play the game. “Elden Ring” is coming to consoles (excluding the Nintendo Switch) and PC, which implies it must be able to operate on PS4 and Xbox One to a reasonable degree.

On PC, the Soulsborne series has a shaky reputation. Dark Souls’ early PC version was notoriously bad, and it literally required fan fixes to work properly. Thankfully, this error was corrected in later installments of the series, and the remaining Dark Souls titles, as well as Sekiro: Shadows Die Twice, all operate smoothly on PC. As a result, despite having a considerably larger scope than the other Soulsborne games, fans have high hopes for the PC edition of “Elden Ring“. “Elden Ring” has a large open area to explore, which necessitates the use of amount, making it significantly more demanding on technology than previous FromSoftware titles.

“Elden Ring” is set to be published on February 25th, and FromSoftware has released the game’s specifications for PC players. “Elden Ring’s” official Twitter page has a new post that lists the game’s minimum and recommended PC requirements. Across the whole, a Windows 10 operating system, 12GB of RAM memory, and 60GB of storage space are required. 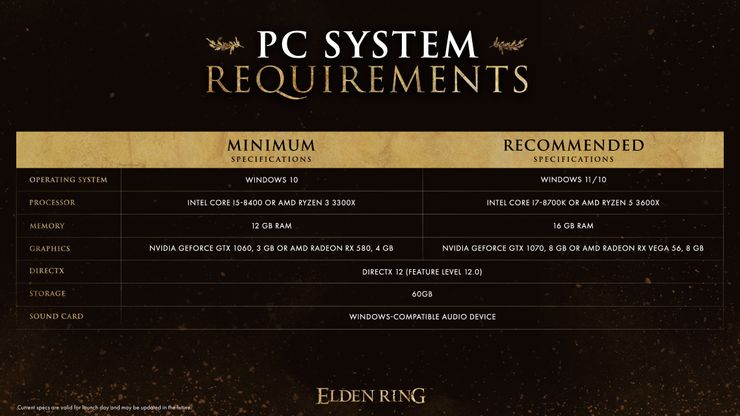 The “Elden Ring” specifications are remarkably high for a game that will be released on previous-generation systems. Because the “Elden Ring” network test was available on previous-gen consoles, most fans aren’t worried about any Cyberpunk 2077-style issues with the old systems at launch, especially given the breadth of both games. “Elden Ring’s” tech comparisons on PS4 and Xbox One indicated a consistent 30fps performance, which is totally good for a FromSoftware product. “Elden Ring” appears to be a game that will be difficult to play on budget PCs, which is especially irritating for a game that will not be available on any streaming platforms at launch.

It doesn’t take long for PC gamers to make mods that circumvent a game’s existing graphics options and allow it to operate on lower-end hardware. This is something that Sekiro: Shadows Die Twice’s mods excel at. With a little extra effort, PC users might be able to get more performance out of “Elden Ring”, as FromSoftware appears to desire the PC version of “Elden Ring” to be closer to the PS5 and Xbox Series X.