It won’t be simple to defeat the game’s last boss, but with a little (or a lot) patience, you’ll be able to defeat Elden Lord.

Radagon has finally been defeated. Congratulations! It will be difficult to defeat him. Unfortunately, his bout is only the first step of what might well be one of the most difficult clashes in “Elden Ring“. It’s now time to move on to step two. Meet the Elden Beast, the actual form of the “Elden Ring” and a servant of the Greater Will.

The Elden Beast is a test of endurance, whereas Radagon is a test of timing and reaction. With one of From Software’s largest health bars, it might feel like there’s no way out, and knowing that you’ll have to face Radagon all over again just to go back to the arena can lead to extremely devastating failures. But have no fear! You’ll be successful in no time once you understand the most deadly assaults to watch out for—and how to avoid them.

Before you step in, there are a few things you should know

Almost all of the advise for preparation for the Radagon fight applies to the Elden Beast as well. To be safe, you’ll want to be at a high level (about 150), with at least 40 points spent in Vigor. To maximize damage and limit the duration of the fight, level up your weapon as much as possible—the less time you spend battling, the less likely you are to get caught in one of its deadly assaults.

The Elden Beast, like Radagon, has many strikes that deliver Holy Damage. For added protection, stock up on Holyproof Dried Livers or equip Lord’s Divine Fortification.

Remember to bring your favorite Spirit Summon with you (Mimic Tear and Black Knife Tiche being the best of the bunch). Again, everything you can do to help a conflict like this go by quickly is really beneficial. Using a Summon to double your damage output is a terrific method to achieve precisely that. Remember that any damage your Summon took during the Radagon combat will transfer over here, if it survives. Wait for the Elden Beast to ring your bell if you’re confident enough versus Radagon.

What is the best way to defeat the Elden Beast?

The Elden Beast is a huge, cosmic beast with a complete arsenal of strikes worthy of the “Elden Ring”‘s ultimate boss. It’s a good idea to approach the battle in the same way you approached the different dragons you’ve faced on your adventure. Get used to unlocking and locking on during the encounter, and be prepared to cover the distance when the Elden Beast flies away. Also, be aware of the Elden Beast’s several massive AOE strikes, which may possibly one-shot you from full health.

Unfortunately, there is no simple cheese solution to this battle. The Elden Beast is immune to all status effects and has a high resistance to all elements (it even heals from Holy Damage, so avoid that at all costs). Its only significant flaw is a bright gold area on its stomach, so try to strike it there whenever you can (this is also where you can get off a Critical Attack if you manage to break its Stance). If you’re running a melee-focused build, simply use whichever weapon maximizes your damage output and smash away for as long as you need to. Rock Sling is perhaps the finest option for wizards. 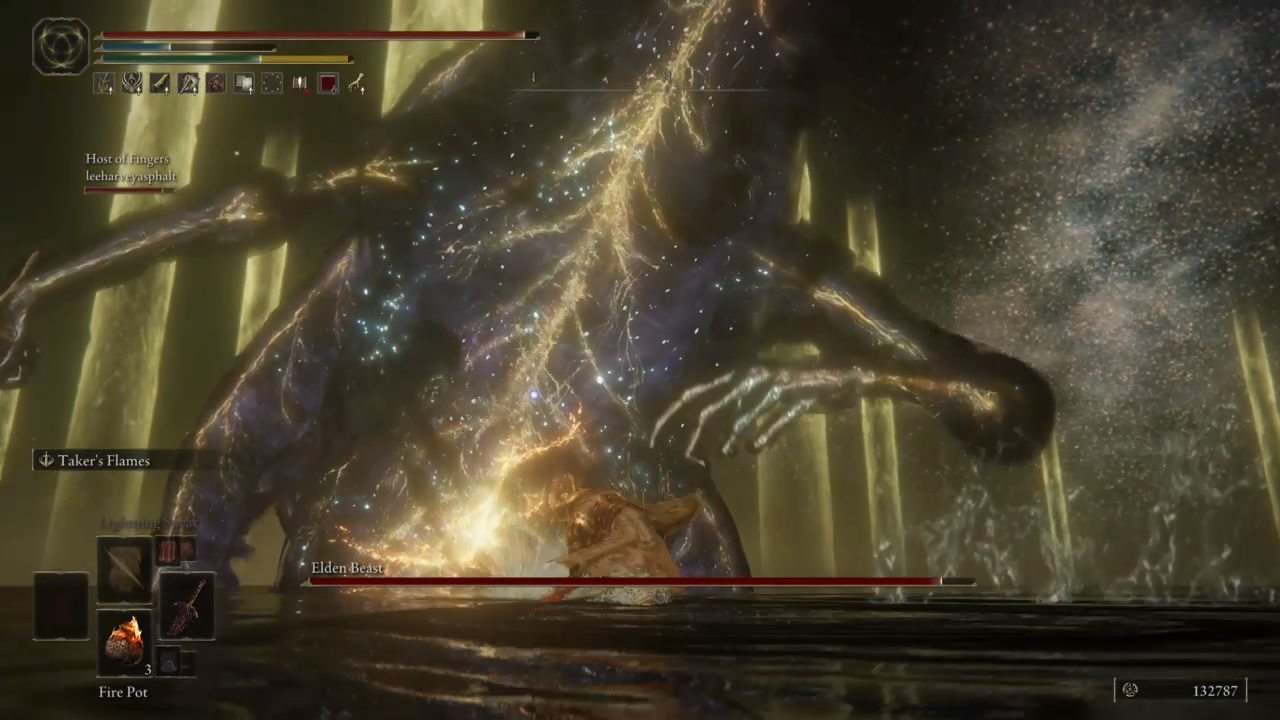 If you’re going to employ a shield, make sure it can withstand as much Holy Damage as possible (the Haligtree Crest Greatshield being the best of the bunch in this regard). However, considering the immense AOE and stance damage that many of its strikes can deal, blocking is definitely not the ideal option. You’ll be better off evading its sword swipes and missiles, as well as understanding how to position yourself to avoid being hit by its AOE effects.

In phase one, these are the most significant assaults to watch out for:

Breath of yellow flame This move will always be used to begin a combat. Run up to its bright gold stomach for a few hits, then duck behind it to dodge the flames it will blast across a big area in front of it. Swing away from the attacker on its tail till the attack is over.
Before plunging its sword into the earth, it will glow gold, followed by a great explosion when it pulls it out. To evade the larger follow-up AOE, roll through the initial explosion and then get behind it. In the meantime, get some hits on its tail.
This is a grab attack. If a luminous gold orb emerges around its palm, back away to avoid being grabbed. If it succeeds to get a grip of you, it will launch projectiles at you.
Purple cloud in the sky. When a purple mist with stars develops, get out of it as soon as possible! It will detonate in a matter of seconds. The Elden Beast may fire this at you from afar or up close, making it more difficult to evade.
Projectiles from the Rune Arc. Its blade will begin to glow, and four Rune Arc-shaped bullets will be fired at you. The first two occur one after the other, so roll, then roll again right thereafter. The third and fourth have a slight delay. Roll through them a few times to get the timing right.
Star-gazing. It will swim below, then return to the surface with its wings spread wide and fire a sequence of homing stars at you. Simply sprint straight ahead in one direction until the attack stops to avoid them. Unlocking your camera may help in this situation, but keep an eye out for a follow-up attack.
Elden Blast of a ring. It will begin to light and then soar up into the sky, producing the “Elden Ring”. You’ll find yourself in the midst of a ground ring that’s rapidly closing in on you, as well as another ring outside of it. Run away from the encircling ring, hopping over it before it reaches the center and explodes in a gigantic AOE explosion. If you make it out of the radius of the outer ring in time, you’ll be safe.
The Elden Beast will hit you with numerous slams and sword swipe combos in addition to all of these assaults in phase one, all while swimming away and reappearing on the opposite side of the arena. Once you get the time right, you can easily evade its sword strikes. When you’re closing the distance after it flees, keep an eye out for its numerous ranged attacks.

The second phase is roughly the same as the first, except with a few new lethal attacks:

The Wave of Gold is in its second phase. It will charge its sword and then release a massive, cone-shaped AOE blast in the direction of the target. Try to get behind it before it can cast the spell, since it has the potential to cause a lot of damage if it connects.
The Elden Stars incantation will take the place of the homing stars. In addition to the lesser stars that will be coming at you, there will be one enormous star that will be steadily approaching you. Run away from the bullets in a straight path once more. The lesser stars may cause some damage, but be sure to dart out of the way of the large one to avoid being hit.
Instead of simply one ring closing in on you, the “Elden Ring” explosion now has three rings closing in on you. To evade the bomb, jump over all three and be outside the outer ring in time. It also loves to follow up the explosion in phase two with a Rune Arc projectile, so be ready to dodge as soon as you exit the ring.
There’s no denying it: this battle is a grind. However, after you’ve made it to the other side, you’ll be awarded with 500,000 runes. Furthermore, it’s now time to select your conclusion. “Elden Ring” has now been defeated! Take a seat, let the credits roll, and bask in the joy of completing one of the most significant gaming achievements of your life.

Details on the “Lord of the Rings: The Rings of Power” Galadriel’s Visit to Halbrand