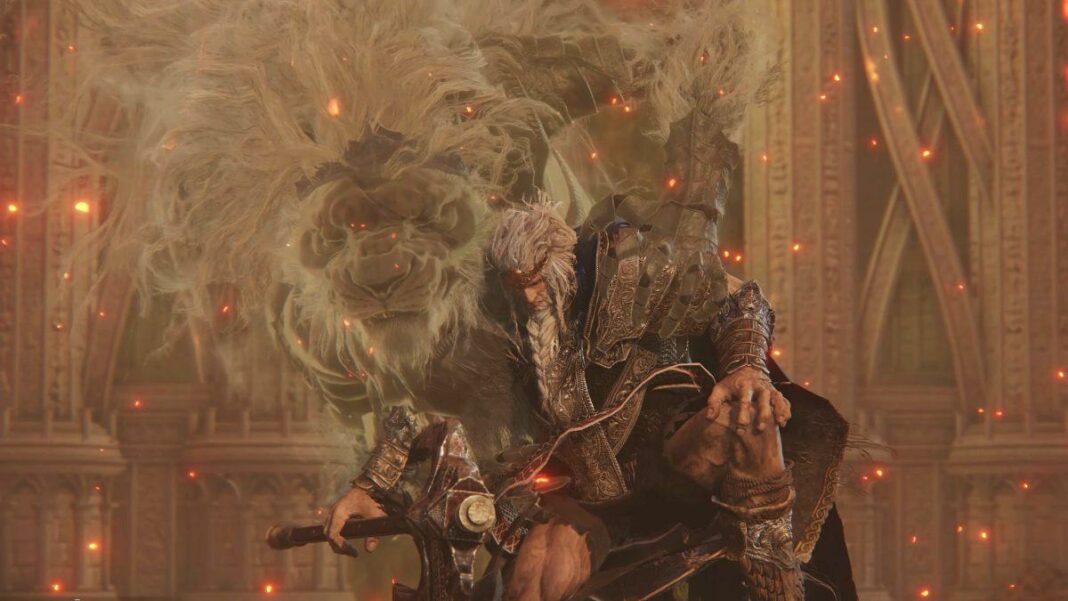 It’s time to make the final ascent to the Erdtree and seize the crown, now that Sir Gideon, The All-Knowing has been slain. Only Godfrey, Marika’s first husband, and the original Elden Lord stand in your way.

This encounter is reminiscent of some of FromSoftware’s most memorable boss battles, such as Slave Knight Gael and Knight Artorias. You can’t cheese him out, and hiding behind a pillar or “hugging the butt” won’t help. Godfrey will force you to be patient, time your dodges precisely, and attack just when it is safe to do so. It’s a true test of talent, but remembering his moves can help you win.

Fortunately, this is a relatively simple battle. There’s no need to worry about Dried Livers or other sorts of Elemental defense because Godfrey only deals Physical damage. Simply put on whatever armor has the most Physical damage resistance and you’ll be OK.

Melee builds should equip the weapon that deals the most damage in the least period of time. Because the attack window is so small, anything with a long windup should be avoided. Any spell that can be cast rapidly is an excellent choice for sorcerers, with Glintstone Icecrag being one of the greatest alternatives. Consider using a Magic sword (such as Adula’s Moonblade) to punish Godfrey if he gets too close. Because he is vulnerable to Scarlet Rot, Faith builds should have either Rotten Breath or Ekzyke’s Decay equipped; this is an excellent way to reduce his HP and minimize the fight’s duration.

Godfrey stays in your face during both phases and can cover the distance quite quickly, thus long-range constructions will struggle without the assistance of another player to distract him. The ideal Spirit Summon for the fight is Black Knife Tiche; she will stay aggressive up close, allowing you plenty of time to plan your own assault. Additionally, both Nepheli Loux and Shabriri can be summoned as NPCs to assist you in the fight. Just make sure you’ve finished Nepheli’s quest and met the Three Fingers at the Frenzied Flame Proscription. 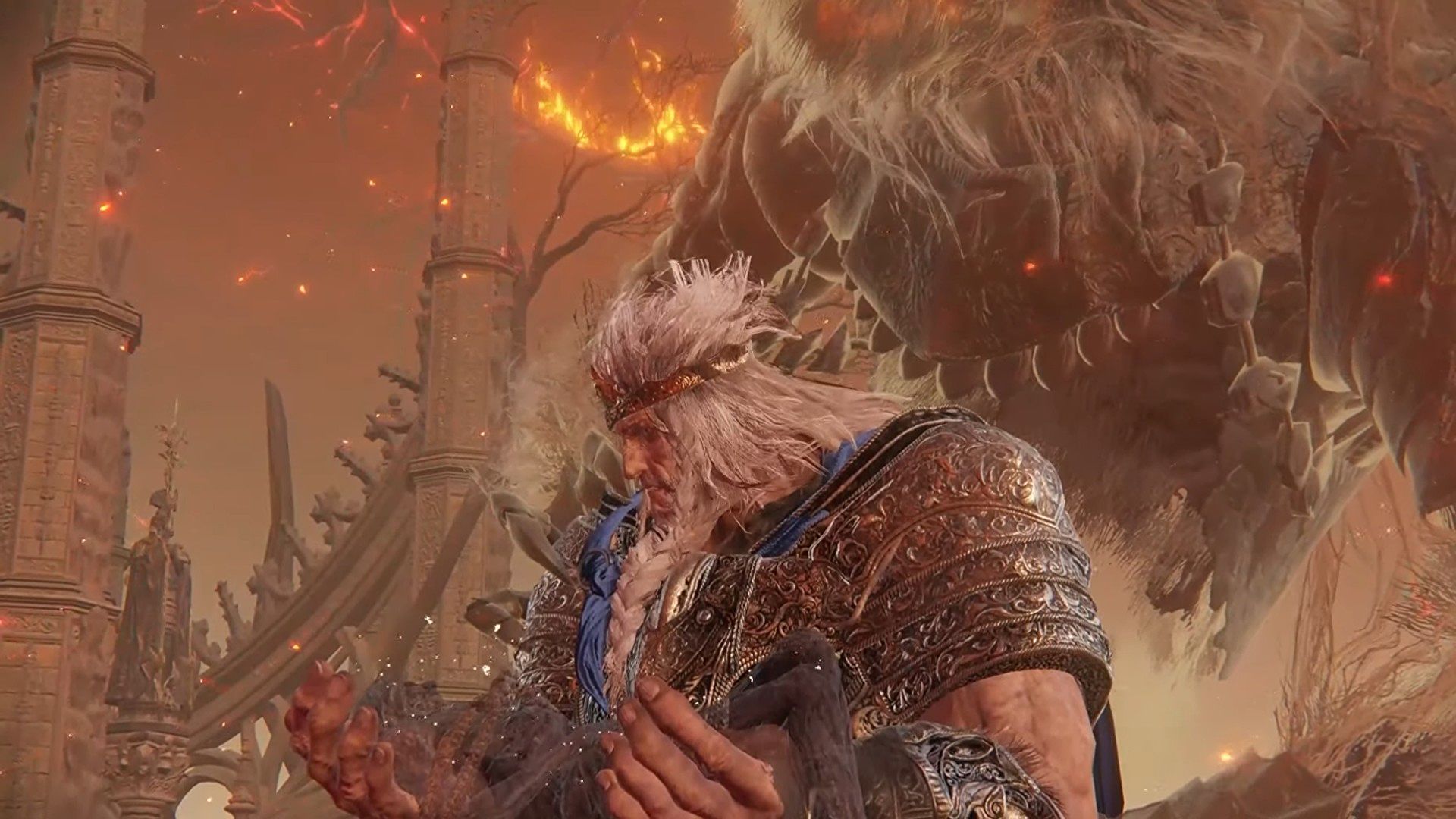 First Elden Lord, how do you beat Godfrey?

Godfrey has a lot of power, but if you know what to look for, you can escape most of his strikes. While a shield can be used (at least during the first phase), blocking his axe will deplete your stamina in just a few strokes. The majority of his assaults are best avoided by dodge-rolling. The timing on several of his movements is a little tricky—the windup takes longer than you may expect—but practice will get you there.

During phase one, keep an eye out for the following moves:

Axe throw. This is generally always Godfrey’s first move in a fight. He’ll launch himself into the air, toss his Axe down to the ground, and then crash down after it. Dodge the axe in any direction and remain out of the way to avoid being crushed by it. As he recovers from this move, get in a few attacks.

Axe drag. He’ll charge at you while dragging his axe behind him, then yank it out of the earth in an upward slash. Make your way through it.

Axe jab. He’ll slash you with his Axe. This technique can connect from a greater distance than you might think, and it’s frequently combined with other axe swings. To avoid being hit, go to the side.

Fissure. Godfrey will swing his axe a couple of times overheard before crashing it down. He will pound the axe deeper into the earth a few seconds later, creating a gigantic rift in the ground that will span the entire arena. The fissure will erupt in an AOE blast a short time later. To avoid suffering damage from the fissure’s development, dodge-roll as soon as he stomps the axe into the earth. To get out of range of the subsequent AOE, run to the side. Be ready for a follow-up attack because he will almost certainly come after you.

Stomp. Godfrey will stomp at you during the battle, sending pebbles springing out of the earth in a cone formation. This move is frequently used in conjunction with other assaults. Avoid the temptation to dodge-roll; doing so will not avoid AOE damage. Instead, as soon as his foot touches the ground, jumps. Jump at him for a jump attack to punish this move.

Super stomp. Godfrey will charge up a massive stomp that will send a shockwave over the entire arena around halfway through phase one (around 75% health). To avoid being hurt, jump over the shockwave. This move has a long windup and recovery time, so make use of it and do as much damage as possible. Instead of the rock black AOE, his stomps will create a shockwave after this move, as long as the white aura is above his head. This is both a benefit and a drawback: his stomps’ shockwave AOE will now cover the entire arena; yet, unlike the previous stomp, this move can be rolled through.

Godfrey would ruthlessly slaughter his companion, Serosh, when he is roughly half-healthy, and show his true form as Hoarah Loux, Warrior. You won’t have to fear his axe anymore, but he’ll use a variety of new grab strikes that are far more lethal. These moves can’t be blocked, and if they connect, they can one-shot you, so be ready!

Grab attack. This is how Hoarah Loux always begins phase two. He’ll run up to you and slowly extend his arms before attempting to grab you. (He will sometimes start this move by jumping at you from distance rather than running later in the fight.) If he connects, he’ll launch you into the air before slamming you back down. To dodge the grip, go to the side.

He’ll also perform a second, more lethal grab assault. He’ll run at you with his arms crossed in this one, sending you flying across the arena and slamming you into the ground if he connects. At the last possible moment, dash through it.

Choke slam. He’ll try to grab you by the throat, yank you into the air, and toss you to the ground. To avoid being hit, go to the side.

Claw attack. He’ll swipe his claws at you twice, pause for a second, and then unleash a lethal assault of seven more claw swipes. After dodging the first two swipes, try to run away from the second round of swipes, which are exceedingly quick and difficult to avoid.

Hoarah Loux’s Earthshaker. He’ll let out a roar (which can knock you out but causes no damage), leap into the air, and slam down on you. He’ll crash both hands into the ground a split second later, causing an AOE blast and craters that will erupt a split second later. Run out of range of the craters before they erupt by avoiding the AOE.

Stomp. He’ll stomp at you, sending rock shards flying out of the ground, just like in phase one. Jump over them once more. At around 25% health, he’ll also do the super stomp, although this time stomping twice instead of once.
Jump over both obstacles.

During both phases of the fight, timing can be a little tough, although his attacks are all well-telegraphed. Take attention to his windup animations so you know which attack is coming next, and be patient with your dodges; hammering the roll button in this fight is a surefire way to lose. You’ll be triumphant in no time if you don’t get greedy with your attacks. You’ll be awarded 300,000 Runes and Hoarah Loux’s Remembrance of Hoarah Loux, which allows you to use the Axe of Godfrey or Hoarah Loux’s Earthshaker Ash of War. It’s time to enter the Erdtree and face Radagon and the Elden Beast now that Godfrey is dead.

Read more about, how to defeat other “Elden Ring” bosses:

The Community’s Endgame Challenge Was Accepted By “New World” Devs