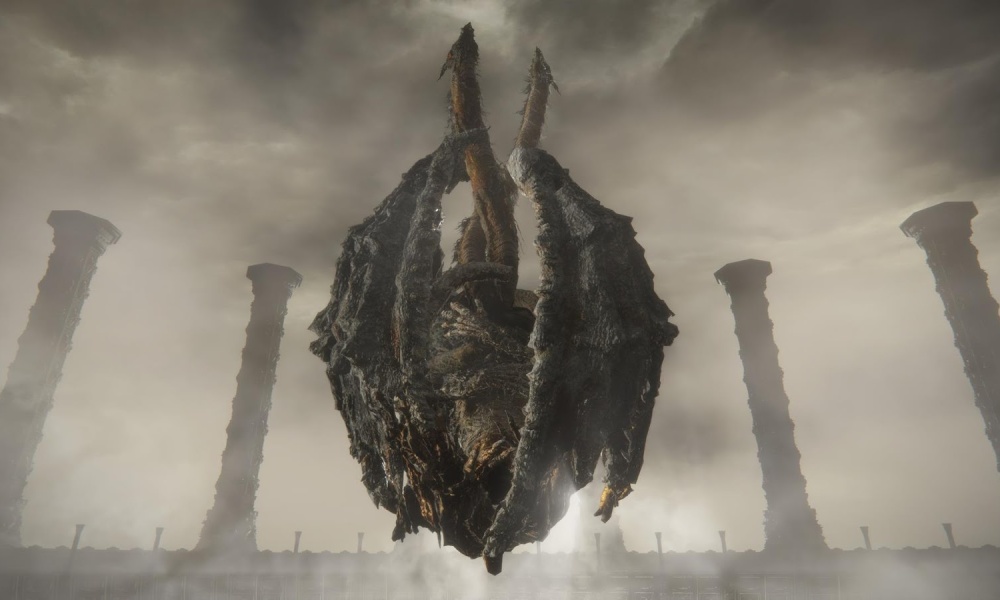 You’ll be up against one of the game’s hardest dragons in the “Elden Ring” Placidusax combat. Despite the fact that it is optional combat, you should highly consider completing it. Victory grants you a Remembrance, which can include a formidable sword and elder dragon fire magic—or both, depending on how you play your cards.

In “Elden Ring”, where is Placidusax?

Placidusax is only accessible at the end of the game. After killing the Fire Giant, you’ll arrive at Crumbling Faram Azula, a wrecked city in the sky where the Dragonlord lives. Take the elevator near the Grace Site of Beside the Great Bridge, walk through the church, and keep walking until you reach a tiny grove of trees. You’ll notice a ledge far below you if you look down. The drop will not kill you, but if you don’t want to take the risk, soft cotton can be used as insurance.

Continue moving ahead in the direction of the tornado. After a while, you’ll come to a massive portion of the destroyed wall with an empty niche in the center. When you get close to the niche, the game tells you to lie down. If you choose to lie down, you will be sent to the boss arena. Before taking on Placidusax, make sure you’re at least level 100 and have a fully updated weapon. It’s also a good idea to use a Rune Arc before the combat, especially if you have Godrick’s or Radahn’s Great Rune equipped.

Placidusax’s move pool is distinct from the Agheels and Smarags you’ve battled so far, as you’d expect from the monarch of all dragons. They can wield holy fire and lightning, and their claws can deliver physical damage. They can also vanish in a puff of smoke. For this duel, equipping the Boltdrake Talisman—ideally an upgraded version of it—is an excellent option.

The use of magic and the usage of a bow have an advantage. Placidusax is rather easy to hit from a distance, and you’ll dodge the majority of its more dangerous attacks this way. To dodge the dragon’s more lethal moves, melee characters must learn the claw swipe technique and trail the dragon after they depart. Placidusax is said to be vulnerable to fire. We didn’t observe much of a change after coating weapons with fire—and fire spells take a long time to cast—but it’s worth a go.

When you get close enough to the dragon, they summon crimson lightning across the battlefield. The attack is telegraphed well before the lightning strikes, so if you’re using ranged weapons, you can stand outside the glowing red areas on the ground to be safe and launch a few attacks.

Placidusax will breathe golden fire in an arc in front of them or swoop overhead and spew fire in a straight line on rare occasions. Placidusax will blast golden fire beams from both heads less frequently initially, but more frequently as their health depletes. This attack has the greatest range of fire attacks, although it’s easy to avoid if you stay beside or behind Placidusax.

When Placidusax is near you, he will frequently elevate his foot, charge his claws with crimson lightning, and slash. You’ll need to avoid it quickly because it’s a swift strike. Placidusax also employs the typical dragon tail swipe, though this appears to be a rare occurrence.

Their vanishing act is even more significant. Placidusax will suddenly vanish in a shower of smoke when you got too close. Although the smoke has mostly dissipated, you can follow its trail to see if Placidusax will emerge. The most dangerous attack includes the dragon vanishing into the sky and reappearing only as they collide with you. They will occasionally reemerge close after vanishing and execute a series of swift assaults in which they reappear, swipe with lightning-charged claws, then repeat this feat a few times in rapid succession.

This attack chain is reasonably easy to escape because you can duck it, but Placidusax will frequently follow up with a gold flame blast. Because the dragon converts to the flame strike directly after slashing with their claws, this is significantly more difficult to evade. Staying well away from the smoke cloud is the best way to keep safe because you’re already out of reach.

You can break Placidusax’s poise, but it’s usually better to utilize that time to cast a more powerful spell, heal yourself, or use a stat-boosting item. Placidusax will have recovered by the time you reach them unless you’re already close, putting you in danger.

After defeating Placidusax, you’ll be given the Dragonlord’s Gift

Remembrance. You can purchase the Dragon King’s Cragblade or Placidusax’s Ruin by taking the Remembrance to Enia the Finger Reader in Roundtale Hold. The first is a sword with the ability to transform into a cloud and reappearance in a lightning strike, while the second is an Incantation that summons the dragon’s golden fire breath. If you haven’t done so already, you can recreate the Remembrance by visiting one of the Wandering Mausoleums in Liurnia’s Mausoleum Complex. That means you can return to Enia and buy whichever item you missed the first time for 2,000 Runes.

Previous articleThe “Elden Ring” Siofra River Guide: Where to Go, What to Get, and Who to Avoid
Next articleDeeproot Depths Guide by “Elden Ring”