Cutting past the hefty armor of this cosmic beast is difficult, but defeating it will net you one of the game’s most sought-after Intelligence weapons.

Many of the most difficult fights in “Elden Ring” take place near the conclusion of Legacy Dungeons, frequently in enormous, epic arenas with significant plot consequences and cinematic cutscenes. Others you just happen across in a field somewhere. One such example is the Full-Grown Fallingstar Beast.

If you’ve already defeated the Fallingstar Beasts at the end of the Sellia Crystal Tunnel or in the Altus Plateau, this massively armored tetrapod could appear familiar. The “Full-Grown” version, on the other hand, has a slew of additional deadly skills and is a substantially more difficult battle. It’ll take a lot of endurance and patience to lower its health meter to zero, but once you do, you’ll be rewarded with one of the game’s best high-Intelligence weapons. 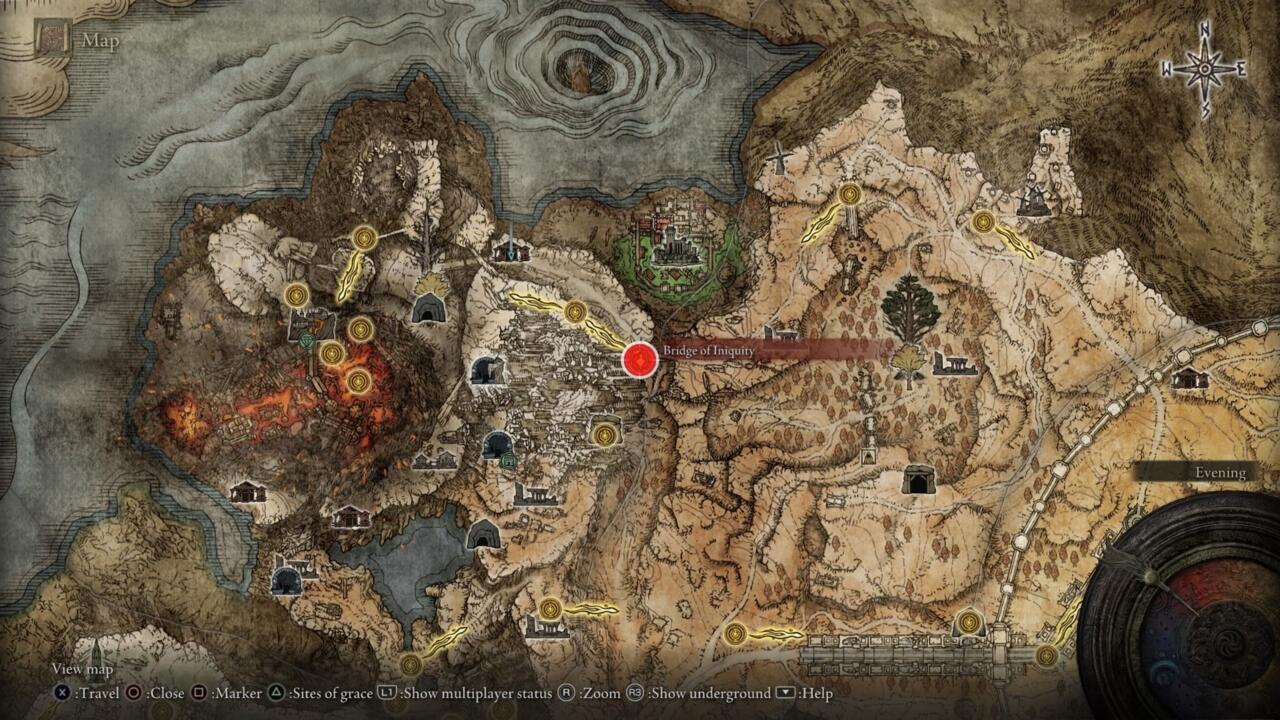 Grace at the Bridge of Iniquity

The Bridge of Iniquity Site of Grace is the shortest path to the Full-Grown Fallingstar Beast. Follow the trail from the top entrance to Lyndell to get there. Continue northwest until you reach the damaged bridge, which is past the Windmill Village. Drop down cautiously and continue the way southwest from there. You’ll ultimately come to a little wooden bridge. Cross it to reach the Grace Site of the Bridge of Iniquity.

Continue northwest, hugging the rock wall to your left as you rest. (Be on the lookout for Abductor Virgins prowling the neighborhood.) You’ll ultimately come to a tall ladder. Climb to the peak, then head northwest, passing the Pumpkin Head and over the rock bridge. Kill the Grafted Scion in the clearing, then go north on the ladder. 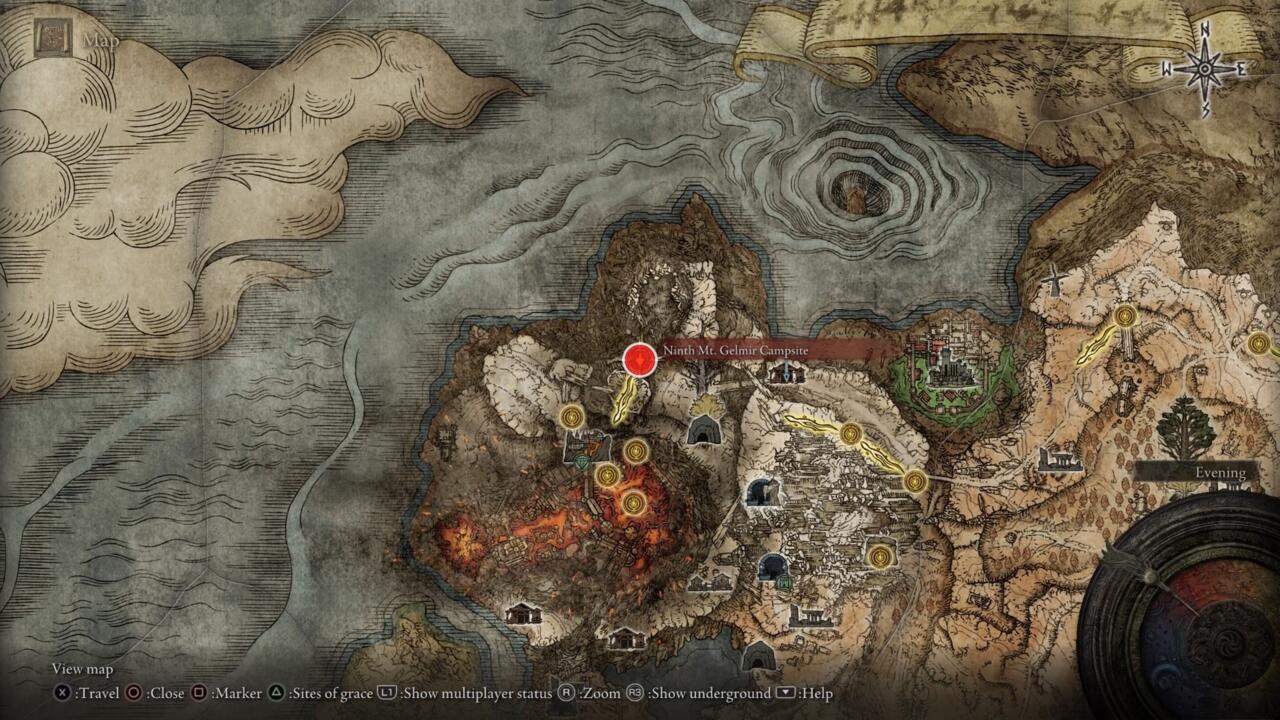 The Full-Grown Fallingstar Beast is nearest to the Ninth Mt. Gelmir Campsite Site of Grace.

Take the tall ladder to your left after you reach the top, then the next ladder right past the Merchant. Continue west, passing by the soldiers and the sword shrine before crossing the wooden bridge. Rest at the Site of Grace on Mt. Gelmir’s Ninth Campsite. Just above you is the boss.

Physical damage is very resistant to the Full-Grown Fallingstar Beast, and it is immune to Frostbite and Bleed. It is vulnerable to Elemental harm, so bring some Magic or Fire Grease or your finest Fire weapon or spell before venturing in. For melee users with the Faith to wield it, the Blasphemous Blade is an excellent choice. Sorcerers can use any Glintstone magic to their advantage.

Always have a decent Spirit Summon with you to give you some breathing room and help you whittle down the boss’ massive health bar. The Mimic Tear is always a good choice, but anything huge and tanky, like Lhutel the Headless or Banished Knight Oleg, is very useful in this fight.

Because the monster deals Magic damage, carry some Spellproof Dried Livers with you or add Opaline Hardtear to your Flask of Wondrous Physick. However, the catastrophic physical damage it may inflict is a far greater concern, so dress in the strongest armor you can within Medium Load range.

How to Defeat the Fallingstar Beast in Full Grown Form

First and foremost: Yes, this boss may be cheesy. Get on Torrent, leap onto the platform, and land as near to the arena’s right edge as possible. You will go unnoticed by the boss. Simply crouch, creep up behind the boss, and use Poison Mist to watch its health meter slowly—very slowly—drain away. It’s a really mundane path to victory, but it works. Continue reading if you’d rather take the boss down the traditional route.

Prepare for a long battle. The Full-Grown Fallingstar Beast is strongly armored and has a large health bar. Its head and back, on the other hand, receive greater damage, so target your assaults there whenever feasible. 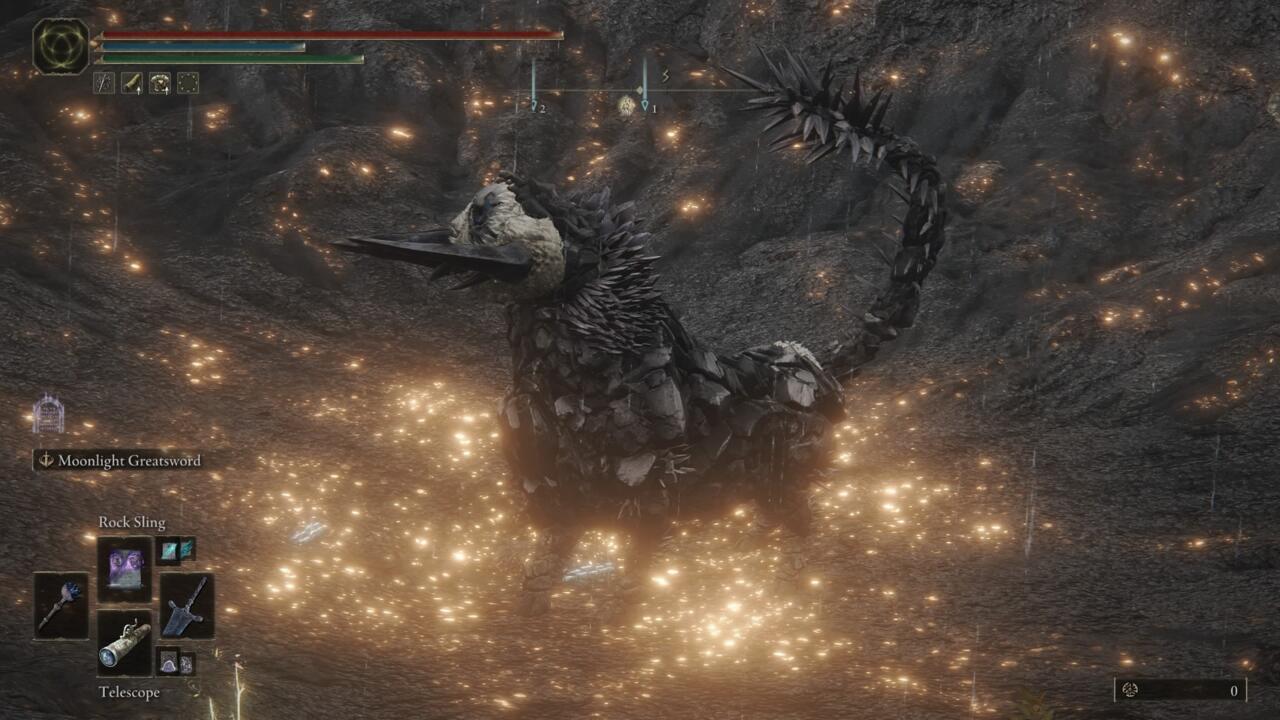 For greatest damage, aim your blows against the white of its head or its butt.

This combat may be approached in two ways: through torrent or on foot. If you opt to battle on Torrent, the goal is to just run away from the boss’s assaults while doing damage with arrows or spells from a safe distance. It’s a realistic technique, but it’s also dangerous; one strike from the Beast would almost certainly kill Torrent, leaving you unprotected on the ground. With this strategy, you’ll need a Spirit Summon to draw its attention up close and allow you time to recover from a distance.

It’s ultimately up to you how you approach the combat, but fighting on foot is recommended. Its assaults are all well-planned and simple to avoid if you know what to look for. You won’t want to rely on a shield because its strikes can deplete your stamina bar in one or two hits if they are blocked, so prepare to roll. 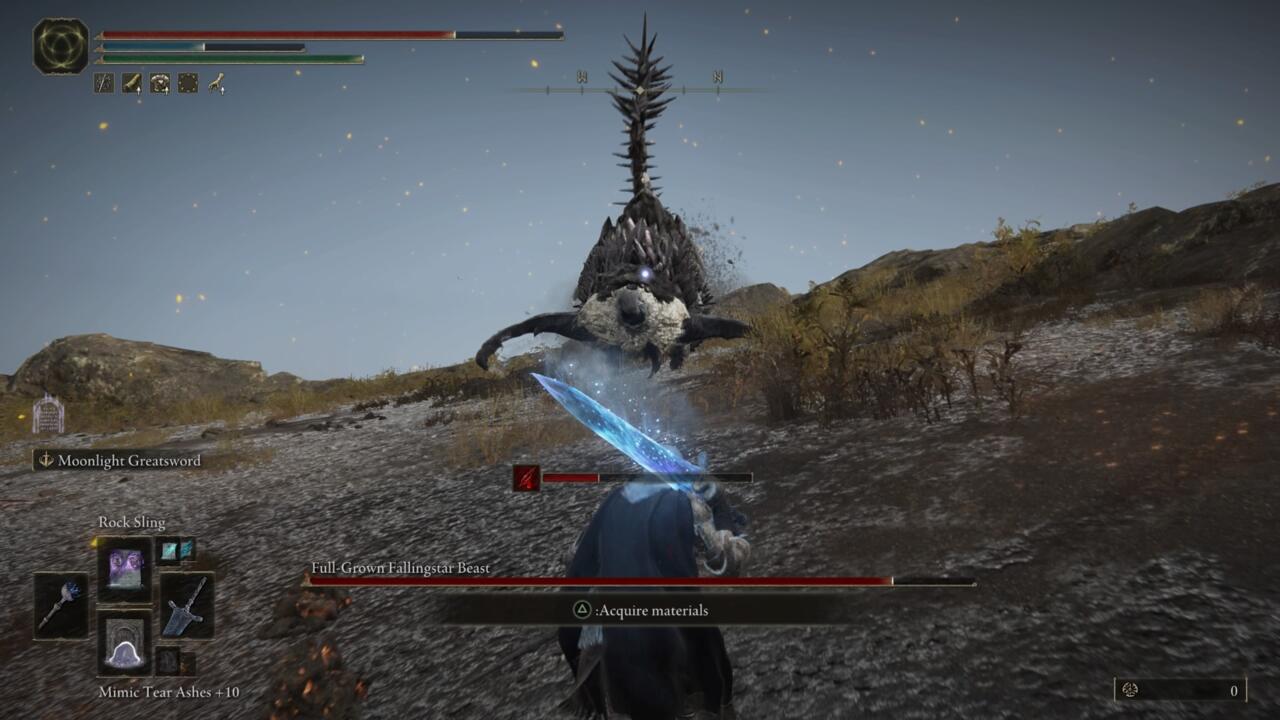 A charge assault is always used by the Beast to begin a combat. When it opens its jaw and lowers its head, you’ll know it’s coming.

The ladder or the leap platform can be used to reach the Full-Grown Fallingstar Beast from the Site of Grace. When climbing the ladder, however, the monster will see you when you reach the top and may knock you down to your death below. Take the jump platform and strive to land to the right of the boss. You can use a powerful assault to catch the boss’ attention from here before it notices you. (Use Cerulean Hidden Tear and Comet Azur, for example, during this time.)

During phase one, keep an eye out for the following major attacks: 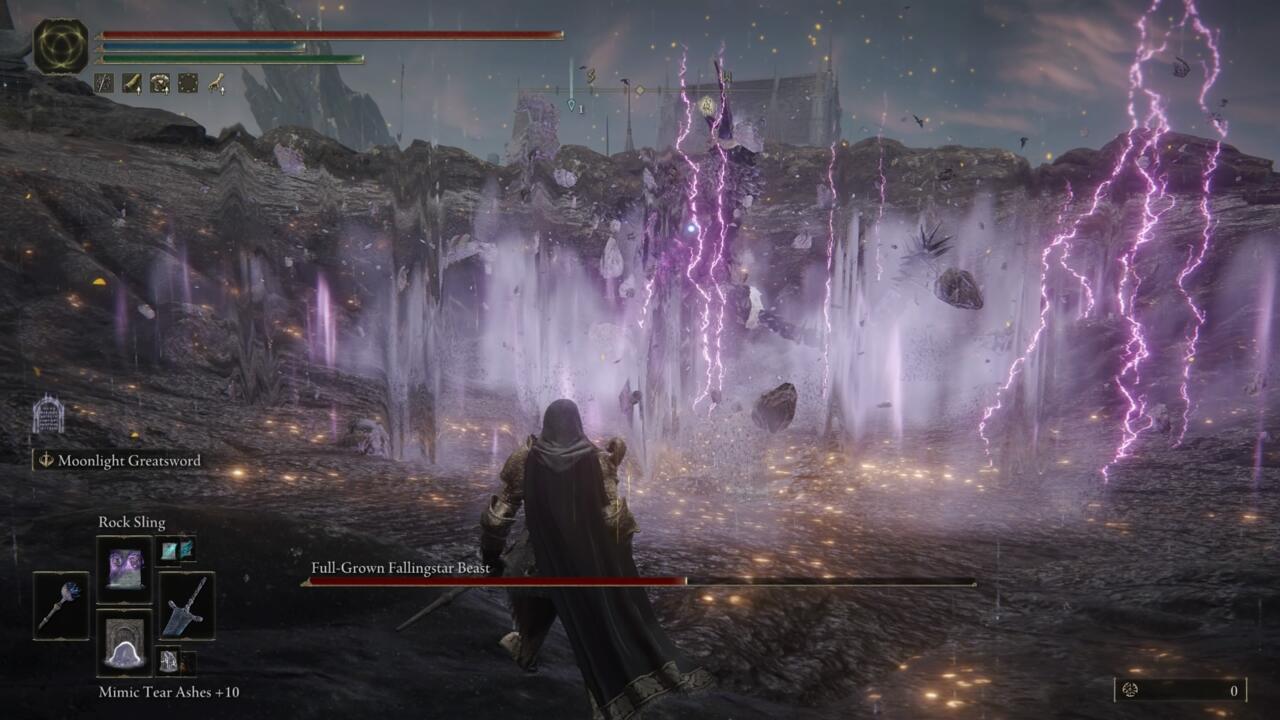 To avoid being caught in the AOE, rush away when the air surrounding the boss begins to twist and electrify.

Phase two begins when you’re roughly 50% healthy. It’s much the same as phase one, except with a few of lethal new attacks: 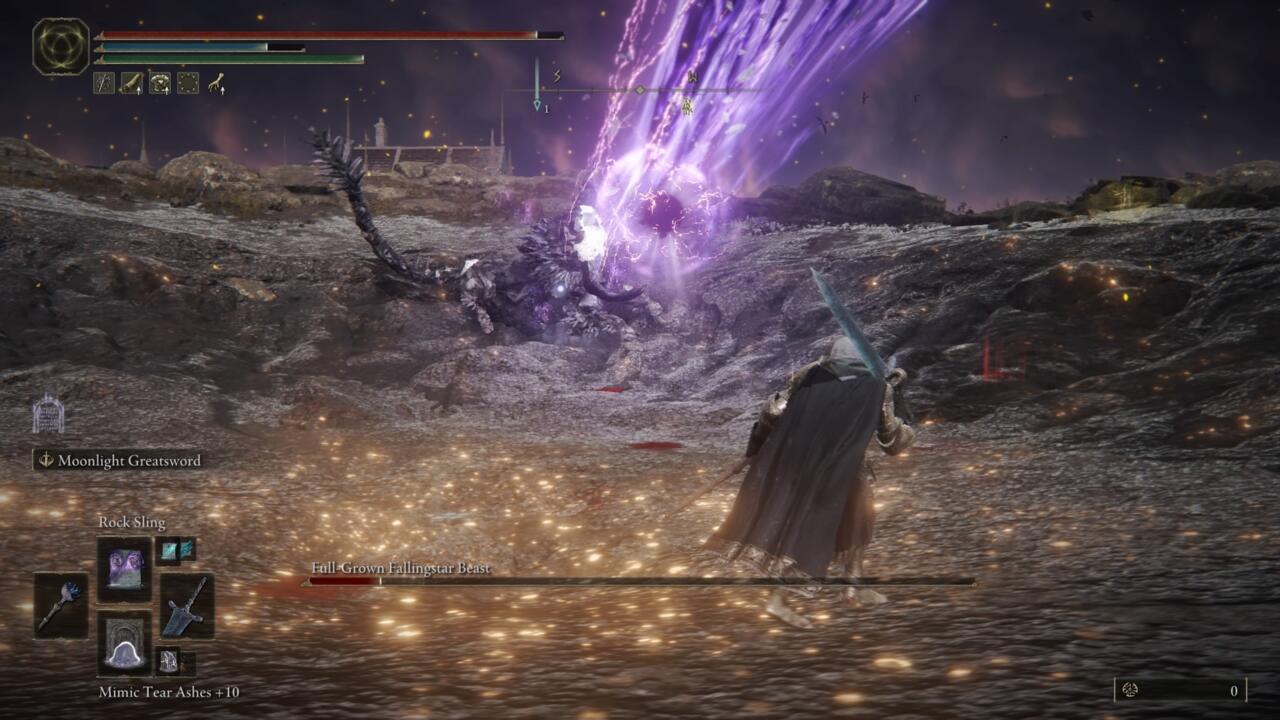 After the Beast’s second charge, go behind it to evade the energy beam.

It takes some time to whittle down the Full-Grown Fallingstar Beast’s strong armor, but with patience and good dodging, you’ll be able to destroy it in no time. You’ll be awarded with 21,000 Runes, a Somber Smithing Stone, and the Fallingstar Beast Jaw, a melee weapon based on Strength/Intelligence that has the Gravity Bolt Skill.