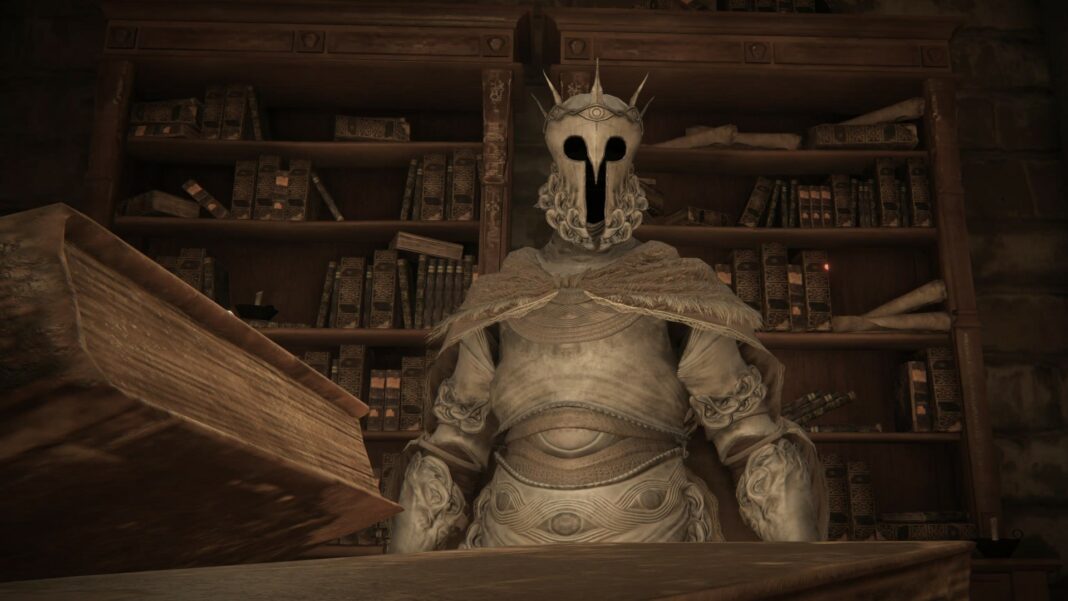 It’s time to go to the Erdtree and seize the throne now that Maliketh is gone and Lyndell is buried in ash. Unfortunately, the battle is far from over. Some of “Elden Ring’s” fiercest bosses stand in your way. Sir Gideon Ofnir, The All-Knowing, is first on the list.

It’s no wonder that Gideon, as the head of the Roundtable Hold and an “all-knowing” scholar, has a powerful arsenal of attacks. The fight is effectively a display of all of the game’s most potent Sorceries and Incantations, many of which you’ll have seen in earlier boss fights. This fight will be a breeze if you know how to evade these spells or can apply so much pressure that he never has a chance to perform them.

Because this is one of the game’s final confrontations, you should be at a high level by the time you arrive. A temperature of 150 degrees is good. Get your weapon to its maximum level, which is +25 for normal weapons and +10 for unique weapons.

While Gideon’s most dangerous attacks deal Standard damage, they also deal Magic, Holy, or Fire damage. Bring along some Spellproof, Holyproof, and Fireproof Dried Liver, as well as whatever armor has the most resistance to Elemental damage (Lusat’s Set being the finest of the group). It can also help to mix the Opaline Hardtear into your Flask of Wondrous Physick.

Because Gideon is vulnerable to Madness, high-Faith builds should include their favorite Frenzy Incantations. Ranni’s Dark Moon and Eternal Darkness are the finest spells for sorcerers in this duel.

Finally, summoning a Spirit Ash can quickly dispatch Gideon. You’ll want something that can deal a lot of damage up close, like the Black Knife Tiche or the Mimic Tear if you’re using a melee-focused build.

What is the best way to defeat Sir Gideon Ofnir, The All-Knowing?

Gideon’s Comet Azur is one of his most lethal spells. Prepare to dodge or seek refuge behind a pillar when you notice the blue energy beam ramping up.

Gideon’s Comet Azur is one of his most lethal spells. Prepare to dodge or seek refuge behind a pillar when you notice the blue energy beam ramping up.

If there’s one approach you should use against Gideon, make it nonstop aggression. His spells are strong, but they’re mostly all projectiles with long cast times that can be readily disrupted by even a light strike. Backing him up against a wall leaves him nearly unusable; reduce the gap as quickly as possible and stun-lock him.

If you’re going to use a long-range strategy, such as spells or arrows, you’ll want to bring an aggressive Spirit Summon with you. Gideon will cast the majority of his most lethal spells from afar. Having another player stay in his face to interrupt his casts will offer you more time to plan your own long-range strikes instead of continually dodging his projectiles.

Gideon will begin a speech as soon as you enter the arena for the first time. He won’t become hostile until he’s through speaking, so rush up to him and deliver your most lethal assault before he can fight himself.

Gideon isn’t a melee fighter. Instead, he relies on the game’s most powerful spells. These are the spells he’ll use throughout the battle:

Comet. He’ll launch a massive Glintstone comet at you, occasionally casting the spell four times in quick succession. To avoid being hit, go to the side.

Azur Comet. If you get caught in its path, he’ll unleash a massive energy beam that can easily one-shot you. Fortunately, the charge-up is well-advertised. Before he unleashes the beam, roll to the side.

Carian Phalanx. If you come too close, he’ll summon a magical sword arc above his head that will shoot at you. As soon as the discharge of the projectile, roll to the side to avoid them.

Rykard’s Rancor. A big red skull will float toward you and stalk you around for a time before vanishing. The crimson trail left by the skull in the air will begin to burst shortly after, starting where the spell was cast and finishing where the skull vanished. The skull, as terrifying as it seems, does not truly cause harm. Simply pay attention to its progress and move out of the way before the AOE explosions begin.

All of the Sorceries can be avoided by hiding behind one of the many pillars strewn throughout the room. Eternal Darkness can also be a big aid if you have the Intelligence required to cast it. It produces a portal that redirects and absorbs nearly all of Gideon’s spells, allowing you enough time to prepare an attack. Better better, use Ranni’s Dark Moon to completely disable his ability to perform Sorceries.

Gideon will use the following Incantations throughout the battle:

Black Flame ritual. If he connects, he will generate a circle of black flames around himself that will continue to cause damage to you over time. To evade the AOE, simply move away from him.

Triple Rings of Light. He’ll fire three enormous Holy rings that will fan out in straight lines at you before returning to Gideon. To avoid the circles, get between them or dodge through them. When they boomerang back, be ready to avoid them.

Law of Causality. He’ll make a sideways move with his arms before making an Elden Ring on his chest. The ring will burst if you hit him five times. To prevent damage, try to land a final strike with a missile from afar.

Scarlet Aeonia. He will leap into the air, transform into a lotus, and then slam back down, delivering a massive amount of Scarlet Rot in an AOE explosion. While he hovers in the air, get out of the way.

Bloodboon. He’ll launch a wave of Blood Flame at you, causing you to bleed. Simply move out of range or backward when he approaches.

Gideon is particularly vulnerable to melee attacks once again. While his spells are strong, they are all susceptible to interruption. Get in his face and don’t let up on the attacks, and you’ll be able to defeat him before he can perform the majority of his spells. You’ll get 150,000 Runes, the All-Knowing Set, and the Scepter of the All-Knowing if you slay him. It’s time to move forward and confront Godfrey, First Elden Lord.

Less Than 13% of Shanghai Families Having Second Child