“Elden Ring” is full of over-the-top boss encounters, but the boss battle against Rykard, of Blasphemy, is one of the game’s most memorable due to its unique gimmick. While Rykard’s battle isn’t nearly as challenging as other Demigod bosses “Elden Ring” has to offer, such as Starscourge Radahn, he may still quickly knock you down if you don’t stay alert or fail to properly use the item the game strongly suggests you should exploit.

To confront Rykard and claim his Great Rune for yourself, you must first pass through Volcano Manor. Here’s how to get to Rykard’s boss chamber, as well as some helpful hints for taking down this Shardbearer.

How to Get to Rykard

There are two basic methods for accomplishing this. The first step is to go to Volcano Manor from Mt. Gelmir and then accept and fulfill Tanith’s series of murder assignments. Tanith will ask whether you want to visit the Lord of Blasphemy if you finish those objectives. If you accept her offer, you will be sent immediately outside Rykard’s boss chamber.

The second approach is to battle your way through Volcano Manor. To do so, you must first speak with Tanith within Volcano Manor, accept her offer, and obtain the Drawing-Room key. In the rear right corner of one of the doors accessed by the key is an illusion wall. Continue to battle your way ahead from there. You’ll ultimately have to face up against a Godskin Noble in a boss encounter. After that, go through the manor until you reach the mist gate that leads to Rykard’s boss room.

There will be a corpse with an item just inside the boss chamber entrance. This item is a weapon called the Serpent Hunter great spear. This weapon is critical to fighting Rykard, therefore equip it. 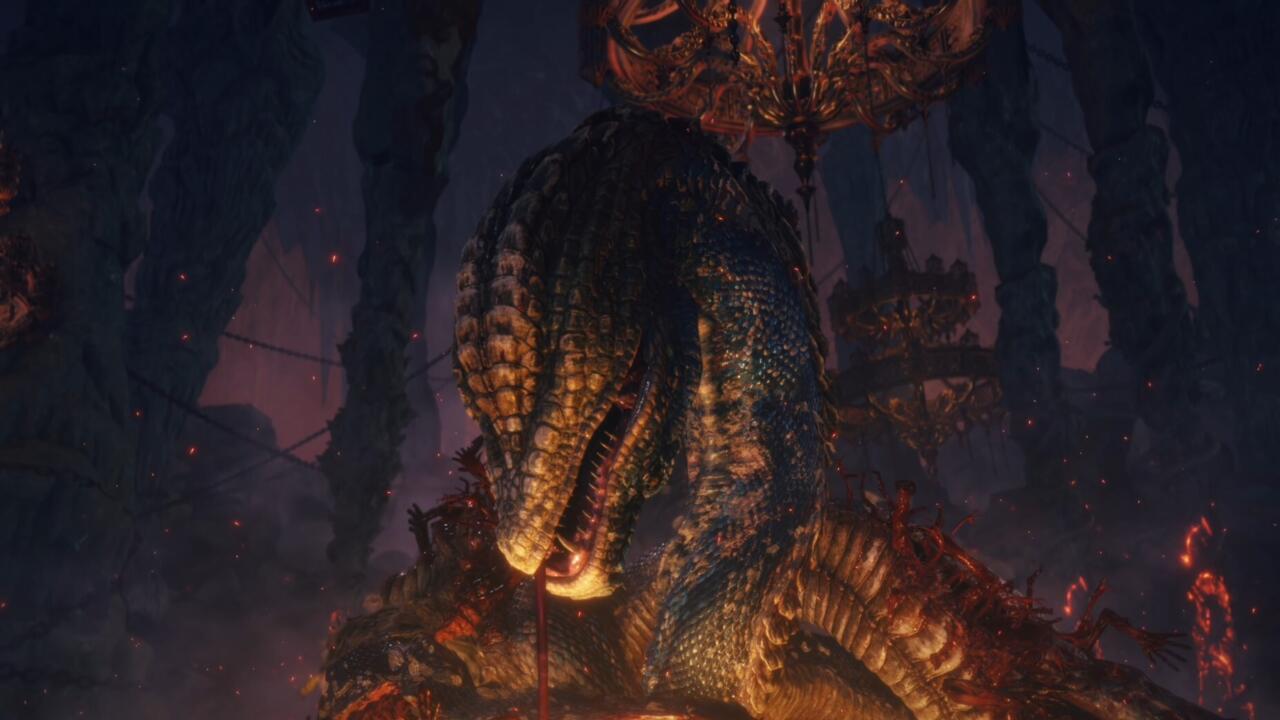 The fight against Rykard is what is known as a “gimmick” boss fight, or a combat in which the type of character you’ve designed ultimately doesn’t matter. Gimmick battles, on the other hand, center upon employing a specific item or mechanism to emerge triumphant. The Serpent Hunter spear is the gimmick in this scenario.

While it may appear to be a standard spear at first glance, the weapon possesses a tremendous ability that is only available during this boss encounter. All of its assaults against Rykard are substantially amplified, with the spear releasing a long-ranged white beam with each attack. This gives you the ability to fight the enormous Rykard from a far wider distance than usual. You can theoretically use your standard weapons or sorceries against Rykard, but you will have a considerably more difficult time doing it. This fight is intended to be completed using the Serpent Hunter.

The Rykard boss battle, like many of “Elden Ring‘s“ renowned boss battles, is divided into two halves. The first is the God-Devouring Serpent, a giant coiled serpent that must be defeated in order to reveal Rykard’s real form. This snake has a few crucial attacks to be aware of. The God-Devouring Serpent may periodically lunge at you from the side with its head, occasionally following up one assault with another. This attack may be safely deflected, or you can just timing your rolls to avoid being hit.

Another, more hazardous attack the snake will utilize is an unblockable grab, which will be indicated by the serpent lifting its head high before lunging at you. To escape getting grabbed and smashed into the ground, you’ll need to either move out of the attack’s quite large range or dodge at the correct time. The serpent will also use toxic venom to harm you, as well as spinning in place to spew balls of lava around its body or in front of its mouth.

These assaults are simple to avoid; just stay a safe distance and avoid standing in the puddles of fire/poison. The serpent will perform one final, fairly destructive assault. The serpent will rear up, pound its head into the earth, and then flip its head up. This will trigger a lava earthquake to erupt in a massive arc directly in front of its skull. This cannot, in our opinion, be avoided or jumped over. The simplest way appears to be to stop the assault, preferably with a shield with strong fire resistance. You’ll still receive little damage, but it’ll be far less than the large chunk of health the strike would usually impose.

Once you’ve mastered the God-Devouring Serpent’s assaults, all that remains is to use the Serpent Hunter’s special attacks to do damage anytime an opportunity presents itself. Even without any upgrades, the spear provides significant damage and may be utilized from a safe distance due to its vast range. Take your time, poking the beast until it’s “dead.” You may also conjure a Spirit to assist distract the boss, and if you have the Mimic Tear, you’ll have the advantage of having two players carrying the Serpent Hunter weapon.

If you have a good health pool and strong fire resistance armor and talismans, you may also rush straight up to the God-Devouring Serpent, stand in the flames around its body, and cut away with the Serpent Hunter. You’ll incur small fire damage that you’ll have to recover through, but being that close to the monster’s body prevents it from using most of its attacks. You’ll still have to be careful when it spins in place and unleashes fireballs. 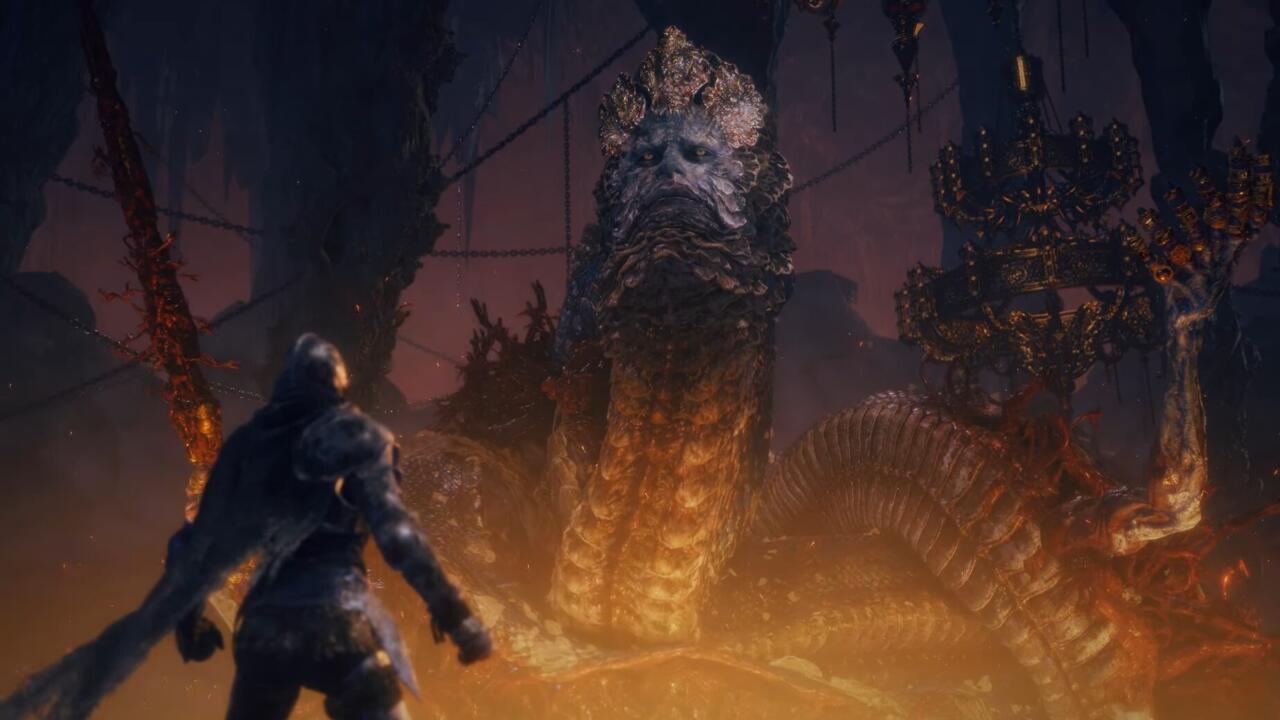 Rykard’s real face will be revealed after destroying the serpent…quite literally. He’ll also take a large sword coated in guts from the serpent’s jaws. Rykard, thankfully, isn’t that much more challenging than his prior form. His sword is a major new component, which he will utilize for a variety of assaults. He will occasionally do long, slow sweeps with the blade, which are simple to avoid (dodge towards the sword, not away, as the attack is so sluggish that you may still get caught up in it if you dodge the incorrect direction). His sword thrust assaults will be slightly more difficult. These have a great range, so simply watch for when he rears back and ready to stab.

He’ll stab you many times in quick succession, so back up and dodge accordingly. Rykard will periodically spew lava balls around him and produce flaming skulls that whizz about and leave light trails in their wake. These trails will then ignite, causing explosions to erupt all along the path. Throughout the battle, make careful to avoid any of these paths.

Rykard will perform several new moves when he reaches about 50% HP. For starts, the serpent you’ve previously killed will resurrect, employing many of the same biting attacks as in the first round of the fight. In addition, Rykard will have two new, extremely strong techniques to be careful of. Rykard will raise his blade high over his head and unleash an army of burning skulls. These skulls will pursue you and then explode after a brief interval. When avoiding these skulls, the most important thing to remember is to keep moving. Do not remain stationary, or you will be attacked by a swarm of skulls. It’s advisable to avoid using the Serpent Hunter spear during this phase, as it leaves you vulnerable to the exploding skulls. Rykard will build up for a massive sword slam strike after flinging burning skulls at you. Get as far away from it as possible because if you are hit by it, you will almost certainly die in a single strike.

In this encounter, it’s easy to be backed up against a wall, so make careful to dash away and reposition. Otherwise, phase 2 operates in much the same way as phase 1 did. When feasible, take jabs at him with the Serpent Hunter, avoid getting too near, and be patient. You can also take the up-close-and-personal approach, running straight up to Rykard, hugging his body, and attacking with the Serpent Hunter, like you did in phase 1. (if you have the fire resistance and HP for it). As in phase 1, you’ll still incur occasional fire damage and have a few strikes to watch out for, but you’ll be able to escape his sword assaults primarily as a consequence.

As in phase 1, you can summon a tanky Spirit to draw Rykard’s attention and take some of the sting out of the situation. In addition, if you’re having trouble, you can use a few Somber Smithing Stones (if you have some) to increase the Serpent Hunter’s damage. You should be able to complete this encounter without using any upgrades, although having more damage usually makes things simpler. Keep poking Rykard with the Serpent Hunter, and you’ll be triumphant in no time.

Find Out All About Tom Sturridge, Actor in “The Sandman”