The “Elden Ring” Radahn boss encounter is one of the most tough fights in the game. Multiple instant-kill attacks, fast, surprising sword combinations, and an almost impossible second phase make the Radahn battle one for which you should seek assistance. When it’s too perilous to try, FromSoftware included this assistance in the form of many NPCs who can create an opening for you to assault and knock Radahn to his knees. In “Elden Ring“, here’s how to defeat Radahn.

You may battle Radahn at any time in the game, without needing to go through a dungeon. He’s issued summons all throughout the realm, inviting champions to combat him in the hopes of putting a stop to his Scarlet Rot-induced insanity. But don’t be fooled by the ease of access. Before facing Radahn, you should be at least level 70, preferably with a powerful weapon appropriate to your chosen build, such as the Moonveil Katana, or strong spells with good range, such as Comet. As with other “Elden Ring” boss encounters, activate your Great Rune—is Godrick’s recommended—and make sure your Flask of Wondrous Physik has an useful mix of bonuses available.

When you’re ready, proceed to Redmane Castle in Caelid’s southeast, south of Sellia, Town of Sorcery, and east of the Cathedral of Dragon Communion. To bypass the trudge through the castle, use the teleporter near the Site of Grace at the bridge, and then go inside. When you’re ready to fight, speak with Jerren, the elderly guy on the platform, and then take the elevator down to the beach. 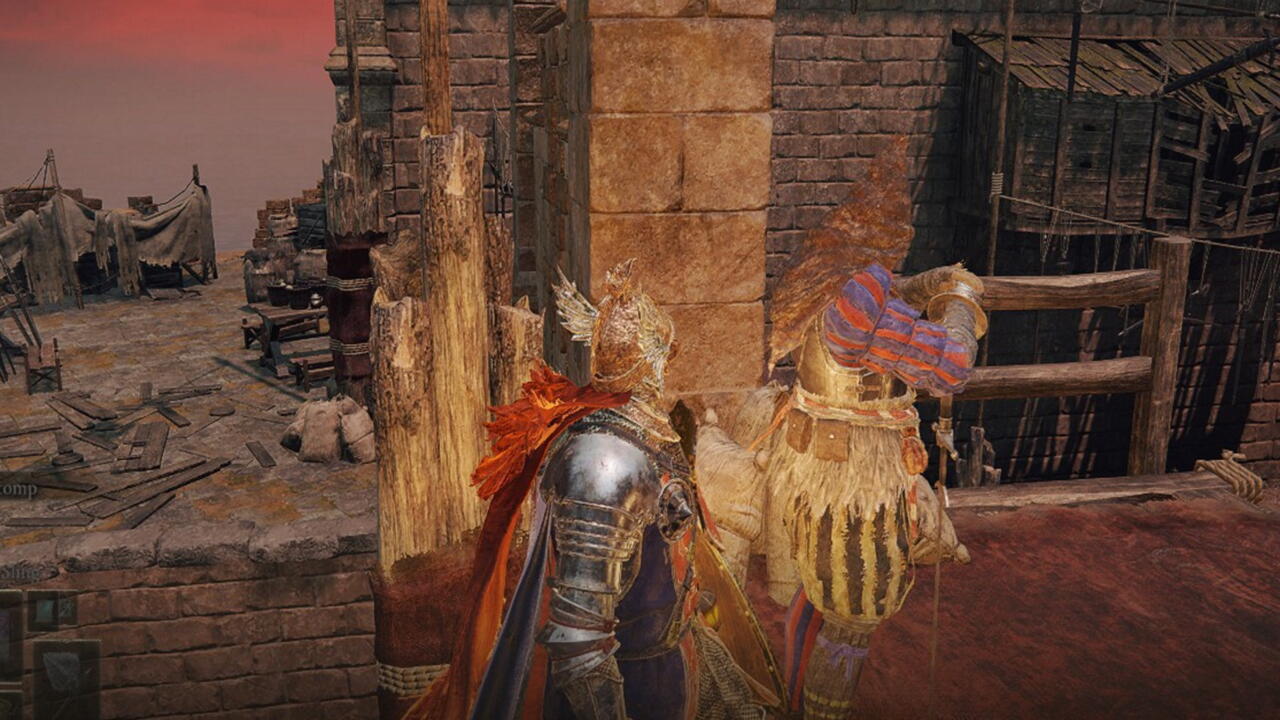 Exhaust Jerren’s speech to get access to the elevator that will transport you to Radahn.

Unlike most confrontations, after the combat against Radahn begins, you can invite many NPC partners. In addition, unlike most encounters, Radahn has the ability to one-shot you with his homing gravity arrows. Maintain your target lock on Radahn to see the arrows, then dodge when they approach close. The debris does not always stop the arrows from striking you, so don’t rely on it as a guarantee of safety.

Make your way to the golden summoning signs as you proceed, activating each one as you come across it. Blaidd, Alexander the pot warrior, Okina, and at least three more can be summoned. None of them endure long, but they provide a pleasant distraction when nearing Radahn.

Radahn fires a succession of spears at you as you draw closer. These fall in a straight line and follow you, so keep avoiding them until the rain stops. If you’re having difficulties with this assault, you can keep evading the gravity arrows until one of the NPC summons reaches Radahn.

When you or an ally approaches, Radahn charges around on his absurdly little, battered horse, slashing at anything in his path, forsaking his ranged attacks. He’ll launch one of numerous potential attacks, frequently with little warning. The most popular appears to be a general slashing combination, in which Radahn uses one to four wild slashes and perhaps ends with a smash.

The essential thing to remember about Radahn and his other attacks is that they will take time to master. Radahn’s timing seems erratic at first, perhaps in line with his rot-addled state of mind. With the exception of his diving strikes, which he telegraphs by putting his swords in front of him, practically all of his attacks have strange, delayed timing. His swing combination, for example, has various lags. He holds the initial swing for around three seconds before slamming his hand down, followed by a couple more slashes with a second pause between each.

His gravity smash is another attack to keep an eye out for during this phase. Radahn thrusts his blades into the earth, enveloping them in a purple gravity field. He then rips them out, smashes them down, and causes a large gravity shockwave. The shockwave has the potential to be a one-hit death strike.

Radahn runs quickly, but there are certain critical opportunities for melee builds to take advantage of. Radahn, like other huge bosses, is susceptible for a short period of time at the finish of a combination or powerful attack—enough for two, maybe three strikes before you need to withdraw. Some gamers propose utilizing the Icerind Hatchet’s Frostbite skill to inflict damage and boost Radahn’s Frostbite meter, although it does need excellent timing—and time you might be spending racing in to strike before retreating.

Radahn is prone to Frostbite and various state ailments, particularly Scarlet Rot. If you wish to use status effects in this encounter, Rot Pots and arrows stained with Scarlet Rot are good choices. These flaws persist even in phase two. Magic users should concentrate on spells that have quick casting periods or that have stronger protective characteristics, such as Glintblade Phalanx.

Finally, keep in mind that you can re-summon vanquished NPCs shortly after they die. It’s a useful technique to divert Radahn’s attention and give yourself a breather, and it’s critical for the second phase.

When Radahn’s health falls below 50%, he will fly into the sky and crash back down in a ball of flame—along with some lethal new attacks. Radahn now has a gravity pull move that drags you in, a gravity wave attack that unleashes a gigantic energy wave, and a spinning strike in which he jumps into the air, spins towards you, then backs up and performs it again.

Radahn also has a gravity variant of Glintblade Phalanx, in which he conjures four gigantic boulders that hover above him and hit at random. There’s no way to forecast these, but if they hit you, it’s back to phase one.

The easiest approach to cope with this is to simply avoid it. Allow the NPCs to do it for you, otherwise you’ll die repeatedly. When Radahn takes flight, gallop away on Torrent and resurrect the dead NPCs. Some gamers have had success hiding behind sand dunes to evade the enormous rocks, albeit they may not target you if you’re far enough away. Radahn will eventually be worn down by the NPCs, and you will be able to continue your trip.