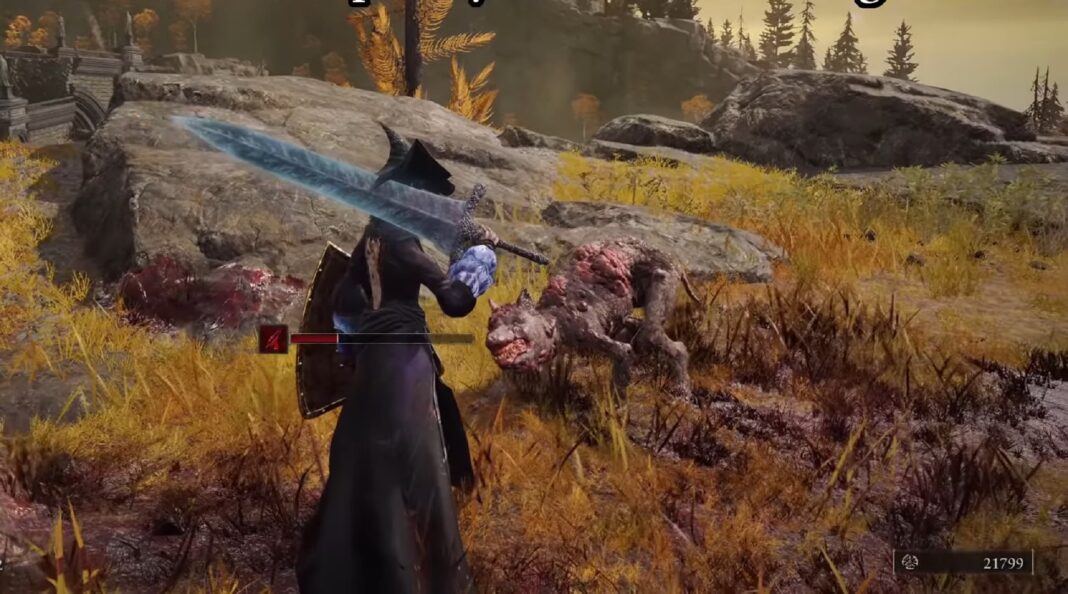 The blood dogs are accidentally dangerous, according to “Elden Ring” modders.

“Elden Ring” modders have discovered strong proof that the game’s most dangerous menace is a bugged blood dog that can instantly murder anyone, even you.

The bloody dogs found in the later stages of “Elden Ring” have a unique bug, as Dark Souls sleuth Zullie The Witch explained in a recent video (citing and sharing the findings of modder Meowmaritus, who built the animation tool used for analyses like this), which turns one of their attacks into an absolute face-melter.

To summarize Zullie’s results, each “Elden Ring” opponent has an ID file and an animation behavior file allocated to it. Because the little and large blood dog varieties share an animation file, whenever a dog strikes, the game analyzes both small and large dog data at the same time. When a huge blood dog attacks, the tiny dog data is cut and the attack is accurately registered as one hit. When the little blood hounds employ a specific lunging attack, however, the algorithm fails and the player check for that attack is restarted, forcing it to strike you a million times, or at least once every frame.

This is why, after running into one of these blood hounds, you may go from full health to your last Site of Grace in a matter of seconds. According to Zullie’s estimations, “Elden Ring” is effectively letting these small menaces strike quicker than we can even see due to certain file problems, causing upwards of 11,640 damage per second to anyone in range. With such numbers, these dogs could theoretically eliminate any boss in the game in a matter of seconds.

Remember that they are blood hounds, which means that their attacks apply the bleed state, which delivers a lot of damage in large chunks. The added bleed damage, which changes depending on your maximum HP, isn’t even factored into the DPS calculation. And you thought Malenia’s Waterfowl Dance was a force to be reckoned with.

Zullie was contacted to follow up on these findings. Because this problem appears to be related to frames, they believe that the higher frame rates attained on PC and new-gen consoles may actually magnify the harm that these malfunctioning dogs may inflict, even if they “can’t think of any other condition that even comes close” to these monsters at 30 FPS.

“A lot of factors have to line up in all the wrong ways for this one to slide through the cracks,” they noted, adding that they aren’t aware of any other opponents suffering from the same issue. “It probably wouldn’t have gone undetected if it hadn’t been so involved.”

“It also happens to be on a dog, who has traditionally been one of FromSoftware’s biggest foes,” they continued. Furthermore, they believe that this difficulty arose exactly because FromSoftware need a means to identify the behavior of blood dogs from that of regular canines. In other words, the status impact that exacerbates the situation and makes these godforsaken canines so aggravating to deal with might have been a root cause of the problem.

According to Zullie’s video, Meowmaritus examined a modified version of the killer dog behavior file and discovered that it accurately recognized the little dogs’ assaults, thereby ending the insta-kill death loop. Although FromSoftware may not apply the exact same remedy, it should be quite simple to rein these hounds in with a future update, at least on paper. Keep your distance for the time being. These dogs are the most deadly creatures in “Elden Ring”, according to the math.

This “Elden Ring” mod adds all of the Dark Souls heroes to the game to assist you in defeating the final monster, but even they wouldn’t be able to take on a pack of these dogs.

Previous articleSpartans Riz-028, Kai-125, And Vannak-134 From The “Halo” TV Show Are Explained
Next articleMountaintops Of The Giants: “Elden Ring’s” Location Guide