With Ashes of War, From Software revolutionized the weapon art system with “Elden Ring”. Not only may you equip any weapon (excluding Unique Weapons) with any special attack (i.e. Skill) you choose, but you can also modify its Affinity to match your build. This has allowed for more customization of play styles than ever before.

There are a lot of Ashes of War to be found in the Lands Between, and almost all of them are viable possibilities… if you know how to build around them. With so many weapons and spells at your disposal, even the most boring Skill can typically find some strong synergy.

Some Ashes of War, on the other hand, don’t require synergy as much as they do experience and expertise. Parry, for example, is the most basic of skills; it is the default Skill for Shields of multiple starting classes. However, if you time it well, it will remain a powerful battle tactic until the end of the game.

Nonetheless, not all Ashes of War are made equal. Some don’t require much—if any—synergy or talent and can stand on their own in terms of raw force. These are “Elden Ring‘s” top ten Ashes of War.

This is the Ash of War for you if you’re running a pure Strength build. Summersaulting forward through the air before crashing down with a two-handed smash is the effect of this move. When used appropriately, Lion’s Claw may quickly dispatch some of the game’s toughest bosses. It’s especially useful when used in conjunction with a long blade, such as the Greatsword, to maximize range.

In “Elden Ring”, the status effect Bleed is extremely potent. To make use of it, you don’t even need any late-game Bleed weaponry. Bloody Slash may be obtained early in the game and stays a strong option until the end. Before making an upward slash and inflicting Bleed, it paints your weapon in blood. It has the ability to hit foes from a startling distance. You can use the Seppuku Ash of War on a left-handed armament and duel-wield it later in the game to boost your capacity to inflict Bleed.

Bloody Slash can be obtained by defeating the Godrick Knight in Fort Haight. This Ash of War has stepped in to replace the broken Hoarfrost Stomp, which has since been nerfed to the point of being unplayable. Flame of the Redmanes inflicts Burn by shooting a burst of flames in a forward arc at the target. The Skill’s true strength lies in its capacity to cause tremendous stance damage. Even the most powerful bosses can be brought to their knees for a Critical Attack with just a few blows.

An Invisible Scarab drops Flame of the Redmane northwest of the Fort Gael North Site of Grace.

Arrows in the Rain

Rain of Arrows is the most critical Ash of War to add to your collection if you’re an archer. You can shoot 12 arrows into the air with a single L2, which will rain down on your target. Rain of Arrows is especially strong because it only uses one arrow from your inventory! When you combine the Skill with Poisonbone or Bloodbone arrows, you can trigger the status effect with just a couple of shots.

Rain of Arrows is difficult to locate. First, go to Sellia, Town of Sorcery, and interact with the “Redmane” Painting. Then travel to Caelid’s Eastern Minor Erdtree. Make your way down the rock ledge behind the tree to the enormous pot and carefully drop onto the tree branches and pillars until you reach the bottom. (Torrent can come in handy here.) When you approach the ghost in the chair, it will transform into Rain of Arrows Ash of War.

Bloodhound’s Step is one of “Elden Ring’s” most remarkable solely defensive Skills. It’s just a longer-distance dodge that temporarily makes you invisible. The Skill, on the other hand, is extremely effective against the game’s smaller, speedier bosses, such as Malenia. It allows you to avoid the most deadly strikes while also allowing you to reemerge behind the attacker to land some hits. This Ash of War should be in every player’s armory.

You must defeat the Night’s Cavalry on the bridge by Lenne’s Rise to obtain Bloodhound’s Step. (Fortunately, he can be cheesed.)

This Ash of War won’t be available until towards the end of the game, but once you do, it’ll be a game-changer. You’ll let out a roar followed by a stomp that causes a big AOE shockwave if you use the Skill. The windup period is long, but the Super Armor granted by this Ash of War is part of what makes it so powerful. Only the most powerful adversaries will be able to disrupt your concentration as you charge up, making it an excellent choice for dealing with large groups. You can also add another input for a more powerful ground slam!

To get Hoarah Loux’s Earthshaker, you must defeat Godfrey, First Elden Lord, and turn in his Remembrance.

This is a difficult one, but it is so effective once mastered that it deserves to be mentioned. Raptor of the Mists is a “duck” maneuver that allows you to dodge attacks. If you activate it as soon as the attacker connects, though, you will not receive damage and instead soar up into the air, allowing you to perform a jump strike. The timing is difficult to master, but once you do, the Skill unlocks an entirely new playing style. For increased leap attack damage, pair it with Raptor’s Black Feathers or the Claw Talisman.

To obtain Raptor of the Mists, assist Bloody Finger Hunter Yura in defeating his foe north of the Main Raya Lucaria Gate Site of Grace. 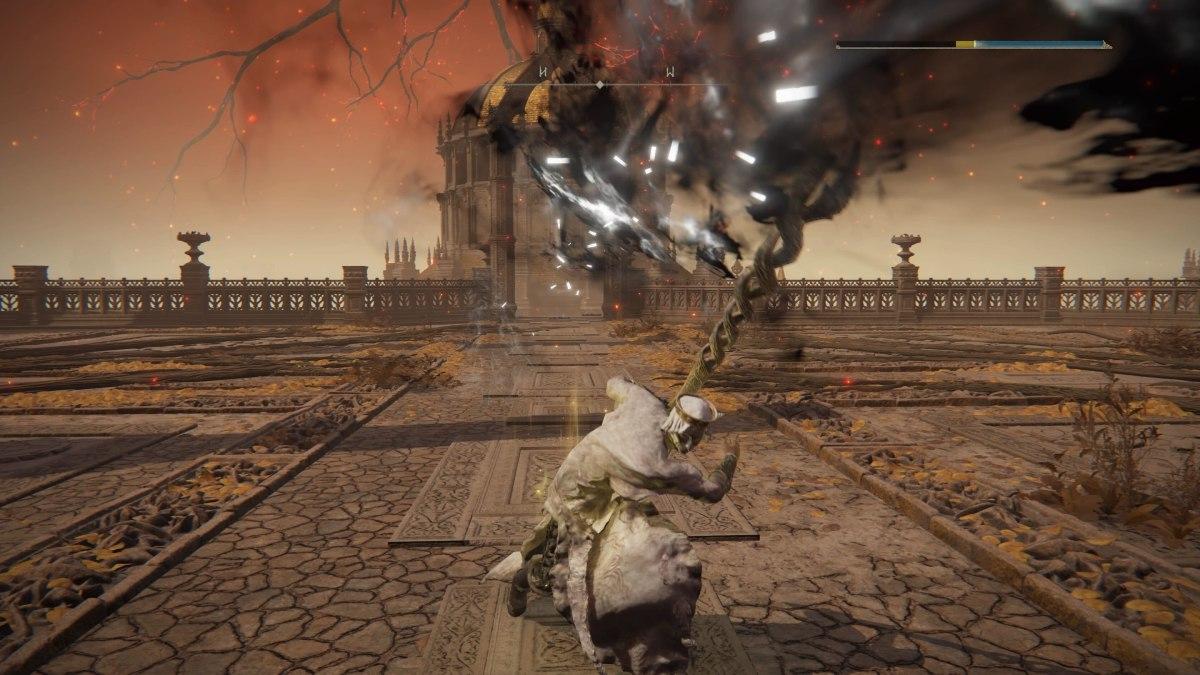 Before plunging the weapon into the ground for an even larger AOE blast, this Ash of War unleashes a massive swirl of Black Flame all around you. The Black Flame will continue to hurt enemies who have been affected by the effect for a while. Because the vortex revolves around you, any low-level adversaries that try to assault you will be knocked backward by the effect. It’s a tremendously effective approach to dealing with big groups of opponents.

Gravitas summons a huge purple Gravity AOE that draws all opponents within range into the blast’s center. It doesn’t do much damage on its own, but its true strength lies in its ability to swarm all adversaries into a tiny area. You can knock out entire groups in seconds if you follow up with another huge AOE assault. It’s a hazardous move on its own, but if you follow it up with a strategy, it may be one of the game’s most powerful Ashes of War.

Make your way down to the Weeping Peninsula’s west beach from the Seaside Ruins site of grace to find Gravitas. The Slender Wayfarer wandering around the bonfire drops the Ash of War.

Prelate’s Charge is unique in that it is effective against both groups and individuals. You will crash your armament into the ground, causing a column of flames, and then charge ahead for as long as your FP or stamina will allow. It allows you to easily plow through hordes of enemies and back a boss into a corner for deadly results. It also works nicely with the Bloodflame Blade Incantation, which imbues your weapon with Bloodflame. Casting this before charging in can quickly bleed an adversary.