The subtitle “Stay Human” was introduced to “Dying Light 2” by developer Techland, and it seemed to reflect the team’s goal to rediscover (and highlight) the humanity at the heart of the plot. Since 2018, the studio has promised that “Dying Light 2” players will be able to choose from a variety of story paths. Those branches are there, and they are plentiful, yet seeing them felt like falling out of a tree and smacking my face on every branch as I fell. While the most important aspect of “Dying Light 2”, first-person parkour, is unquestionably better than it has ever been in this enormous sequel, most of the rest of the game falls behind.

“Dying Light 2” is set in Villedor, a new city in the plot, and features a new, grizzled hero at the center of the struggle. Aiden Caldwell enters Villedor as a “pilgrim,” an outsider deemed harmful to the world’s few surviving safe zones, in quest of his sister Mia, whom he last saw years ago when they were both children. Early and often, Aiden and Mia’s story is badly communicated through hazy flashbacks that aren’t clear enough for even Aiden to rely on. It appears that simply informing players that Aiden and Mia are siblings is supposed to be enough to pique their interest in their upcoming reunion, but Techland fails to demonstrate why anyone should care about Mia beyond the family tie. Aiden’s video-gamey antics as a side-questing superstar leaping across large buildings in a single bound are justified by her being a live Macguffin.

Aiden is surrounded by a large array of individuals that, while sometimes interesting and unique, all have one thing in common: bad voice acting. In terms of voice talent, Aiden’s actor, Jonah Scott, does well, while Rosario Dawson deserves some credit for her role as his part-time ally, Lewan. Other characters attempt but fail to tug at the heartstrings, in part due to terrible performance, and the less essential the goal, the worse the acting becomes. The fact that a character said a phrase at all can sometimes be more embarrassing than how they said it. The writing is frequently off the mark.

The fact that the game’s tone alters so regularly that players may experience emotional whiplash doesn’t help matters. It’s a constant challenge to get committed to what a crazily hilarious or frighteningly serious character is asking of Aiden since they often come across as wooden and disjointed. With so many branching paths, it can be difficult to account for exactly how a conversation will be heard in a finished game, which can lead to line delivery issues, but “Dying Light 2” appears to ignore years of progress made in RPGs to address this particular hurdle, much to the detriment of every character. Other than Aiden, who is nearly the only character that sounds like a real person, there was no one I wanted to spend time with.

The awful story in “Dying Light 2” manages to get even worse by the game’s finale when the last act and a tedious final boss upend any hope of there being anything to salvage by the game’s 50th hour. This game was advertised as having 500 hours of material due to its numerous quests and branching routes, but if it hadn’t been for my job, I would have bypassed every cutscene and dialogue option after the first hour or so.

If you want to play that manner, you’ll probably have a better time in Villedor than I did. That’s because, despite the story’s flaws, the open environment and the way you explore it are actually enjoyable. Techland stretches its muscles and improves on something that was previously extremely good in first-person platforming. Aiden quickly proves to be faster and more impressive than Kyle Crane was in the first game after a few upgrades. Aiden is also better equipped, with sandbox essentials like a grappling hook and glider to aid with his explorations.

In some ways, this core strength is what makes “Dying Light 2” work where so many other open-world games fail; rather than focusing on the major beats–the main quests and most exciting side missions–and leaving a lot of the so-called filler untouched, those peripheral activities here represent the game’s best work. Parkour time trials or simply scaling some of the game’s tallest towers are both enjoyable and repeating. Tightrope walking a mile above the city while the wind threatens to pelt you below gives you a guttural sense of terror. Meanwhile, looking for goods in abandoned storefronts while the undead slumber slumped over like something out of a horror movie puts the emphasis on terror in a way I wish there was more of.

This is facilitated with a skill tree with few unfavorable features. I had to pause each time I could learn a new ability and think about what I’d want–need, really–next for Aiden. Because these abilities are divided into combat and parkour, I was able to farm XP quite consistently simply by doing the things I wanted to improve on. Armor and gear benefits provide an extra layer of role-playing to the game, making me feel less like a hoarder and more like a savvy player for keeping different costumes as anti-hero builds.

The combat isn’t as good as the parkour, but it’s far from the game’s worst flaw. The battle is at its best when faced with hordes of infected, including numerous new special types like Howlers, which indicate a multitude of monsters, and Anomalies, who are monstrous mini-bosses lurking in arenas at night. Managing a crowd of monsters that are slow or swift, tank-like or agile provides the good kind of stress this game was designed to provide. Even after 50 hours, it’s difficult to keep a horde of zombies under control without breaking a sweat. 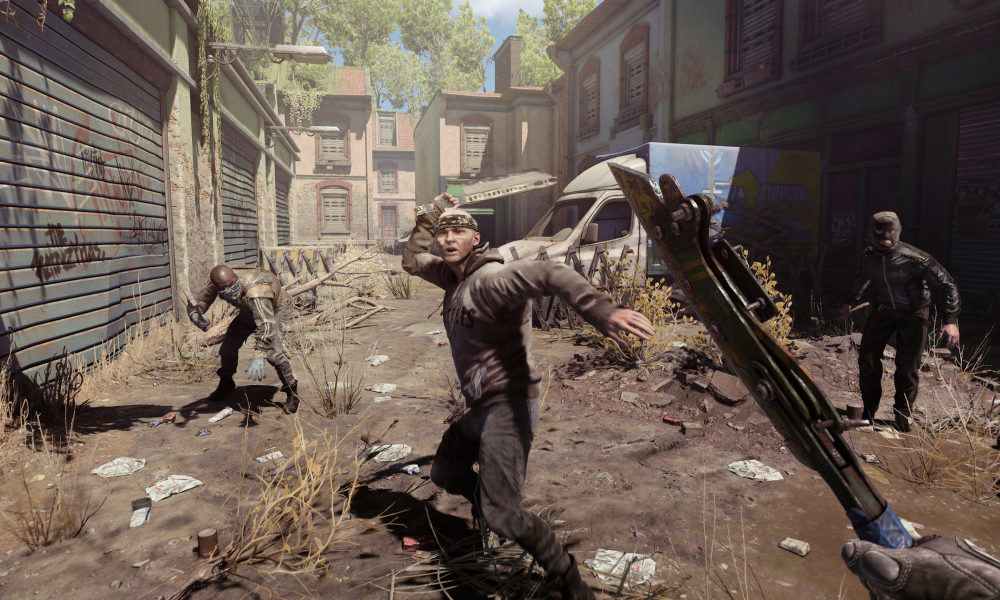 Human combat, particularly with tropey Renegades dressed as Legion of Doom superfans, is less exciting because it frequently boils down to completing the same limited moveset on every horde of bad guys: dodge, slash and slash. There’s an opportunity for some amazing moves, like a vaulting ability that allows you to catapult from one enemy to another, but there’s rarely a reason to be so flashy. I later dropped a lot of this filler in favor of the dropkick, which sends enemies sprawling off roofs in a satisfying way. That is one of those songs that never gets old.

Stealth mechanisms are such an afterthought that it’s difficult to understand why they’re even present. Infiltrating enemy bases and stealthily dispatching them is the kind of fun Far Cry has been known for a decade, but Dying Light’s attempt to emulate it falls short due to the world’s scarcity of thick grass patches, which is about the only option to hide from human adversaries. It’s more fun to dash across rooftops at night as the infected hide in the streets, but even then, coming down to street level, even for a while, maybe irritating because Howlers detect Aiden so quickly. Every touch of the sidewalk in this reinterpretation of the series’ night cycle is effectively a sprint for your life. At times, I found myself wishing for the vision cones from the original game. At the very least, that manner made more sense from the player’s perspective.

Whether you’re chasing down a story lead, parkouring for pleasure, or racing for your life, the soundtrack flawlessly reacts to each step in a way I’ve never seen done before in a game. The dynamic music, composed by industry legend Olivier Deriviere, seamlessly transitions from story to side mission to open-world exploration, even letting the air out of the soundtrack whenever you jump to give you that rollercoaster-like feeling of weightlessness. Surprisingly, the music in “Dying Light 2” creates a far stronger sense of mood and consequences than the story.

Despite all of its time in the metaphorical oven, “Dying Light 2” still seems a little rough around the edges. Bugs weren’t at the forefront of my problems with the game–usually–but I saw stuff like sandbox activities being broken, a windmill puzzle that wouldn’t allow me to climb it, and a river that wouldn’t let me climb back onto land after I fell in. The most common occurrence was a problem with the game’s geometry, where I’d become stuck on certain things for no apparent reason. Thankfully, a little button-mashing usually corrected the glitches, and errors rarely hindered the game’s best features, such as first-person parkour.

“Dying Light 2’s” co-op mode makes the game a little more enjoyable. Bringing buddies to activities like military convoys, bandit camps, and GRE oddities makes them a lot more doable, and you can play the entire game in co-op, with the exception of the prologue, right up to the game’s underwhelming final boss. My co-op sessions have already disconnected a few times, which is annoying, but if there’s any saving grace, it’s that frequent auto-saves ensure I’m just missing a few minutes each time I reset the game.

In co-op, you can complete objectives, side missions, and even gain achievements or trophies, but every box is checked according to the host’s world instance. I returned my weapons and XP to my own save file, but my map was still full of things I’d already done in co-op. Because of this limitation, I feel like co-op is a nice diversion—and it’s greatest towards the endgame—but not how I’d play the entire game.

It’s intentional for all of this to sound incoherent. “Dying Light 2” is a difficult game to understand. Its plot and characters give me the creeps, and it appears to be lacking in polish in many areas. Even after a dozen hours, I’ve found myself returning to the game to complete another parkour challenge, explore through another abandoned science lab, or simply check whether I can go from point A to point B without touching the earth. It’s rough around the edges, and it demands players to put a lot of time and effort into its weakest aspect, but once you recognize that the plot, like gravity, will only drag you down, you may start to defy it and enjoy the things “Dying Light 2” does well.