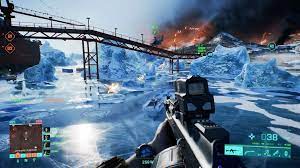 “Battlefield 2042’s” developers recently responded to gamers’ complaints in a blog post, promising map updates and smaller DLC destinations in the future. Last November, the game was released with a slew of bugs. Players fought in World War I and World War II in the previous two Battlefield games. The reintroduction of the franchise to a more modern setting piqued the interest of many fans. Unfortunately, “Battlefield 2042” was released with a slew of glitches and maps that appeared to have been hurried through development.

The transition from the series’ conventional 64 player fights to large 128 person conflicts was one of the major features in “Battlefield 2042”. The game’s maps were graphically stunning and among the most expansive in the series’ history. Players complained that they weren’t optimized for “Battlefield 2042’s” 128-player battles and that they were filled with long stretches of walking while they tried to return to the game’s action. Players are losing interest in “Battlefield 2042” due to this issue, as well as a lack of cover for gunfights. Fans may be encouraged by recent news that map updates and more compelling combat are on the way.

In a lengthy blog post, the developers addressed disgruntled “Battlefield 2042” gamers, highlighting the game’s fundamental flaws and what EA planned to do to improve the experience. The blog tackles users’ issues about huge areas of the game’s map feeling barren, unbalanced, and combat feeling unfocused due to a lack of defined objective paths. According to IGN, the creators aim to make changes to the game’s seven massive levels to address these concerns. EA also intends to use user comments to aid in the creation of future DLC maps. New “Battlefield 2042” maps and DLC will very certainly be included in the Season 1 update, which was recently delayed. They will most likely be smaller and more concentrated in order to provide players with a better-balanced experience.

Previous “Battlefield 2042” upgrades did not leave players with the feeling that the game’s developers were paying attention to their input. One of the publisher’s execs blamed Halo Infinite’s multiplayer surprise launch for the game’s dismal performance, rather than the flaws that gamers have been vociferous about since its debut. The latest update provides fans hope that, rather than ignoring or blaming the problems on another game, the game developer is resolving the issues plaguing “Battlefield 2042”. The blog article does recognize, though, that map repairs and smaller DLC maps will take a long time to produce. A few map goals and spawns have just been relocated to help improve multiplayer flow in “Battlefield 2042”, but more serious fixes appear to be at least a few months away.

Despite the fact that “Battlefield 2042” had one of the most difficult launches in the series’ history, many Battlefield fans are still enjoying the game. There aren’t many multiplayer games that can match the feeling of conquering one of Battlefield’s goals with a decent group of pals. Previous games in the series, such as Battlefield 4, had difficulties and bugs upon launch. Many fans are hoping that, like BF4, “Battlefield 2042” will become one of the best games in the franchise. Unfortunately, it appears that getting there will take some time.